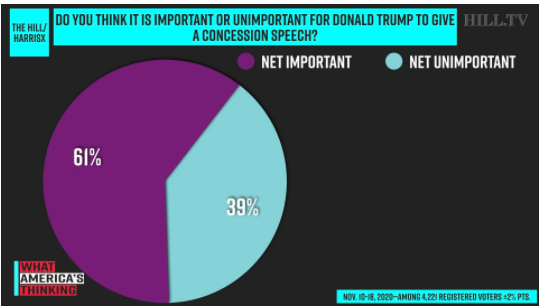 A Hill-Harris poll with a sample of 4k+ has just been published and finds that even the majority of Republican voters think Trump needs to concede.

The overall split is in the chart while the detail shows 71% of Democratic respondents and 53% Republicans saying it is important for Trump to concede, with 60% of independents saying the same.

These are not good for the President and suggest that he is not even convincing those who voted for him earlier in the month.

This comes on the eve of an attempt by Trump to persuade Republican leaders in Michigan to ignore the election outcome in the state and make their own choice of people for the electoral college. They considered this two nights ago but after seeing the reaction of voters in the state stuck with the original plan.

Now Trump is inviting them to the White House in order to put the pressure on.

Meanwhile await the outcome of the Georgia recount.