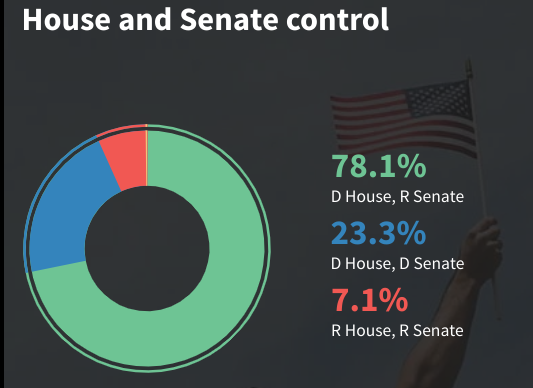 Above is the market from the Smarkets exchange on the big outstanding issue from the White House election fifteen days ago. This is on whether the Democrats can win the Georgia run-offs which would give them control of the White House, the House of Representatives and the Senate.

In spite of the ongoing machinations by Trump to try to hang on to the Presidency and the barrage of legal cases aimed to undermine the result it looks as though it will be 78 year old Joe Biden who will become present on January 20th. For the House his party didn’t do anything like as well as predicted but at the moment it looks as though it will continue to have control albeit with a smaller majority.

The big question is the Senate where currently the split is 48 to 50 to the Republicans with the two remaining seats to be decided in the Georgia run-off on January 5th. Under state law there the election goes to a run off if no candidate secures 50% of the vote.

Biden’s victory in Georgia was one of the surprises in the Presidential election and the question is whether the party machine there can deliver another victory.

My guess is that at least one of vacancies will go to the GOP but the odds on the Democrats in the above market on Smarkets looks value which is where I have had a bet.