There’s a 6 point swing from Con to Lab in this polling – This would put Ed Miliband into Downing Street with a majority of 62, assuming UNS.

It also makes for unpleasant reading for the Lib Dems, as Lord Ashcroft notes,Â A lesson from the blue-yellow marginals. Incumbency is not enough, it appears that the Yellows are on course to lose seats to both the Tories and Labour. 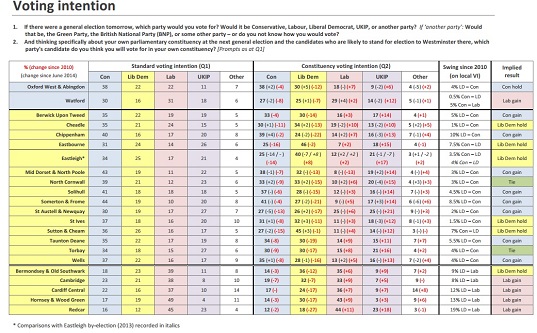 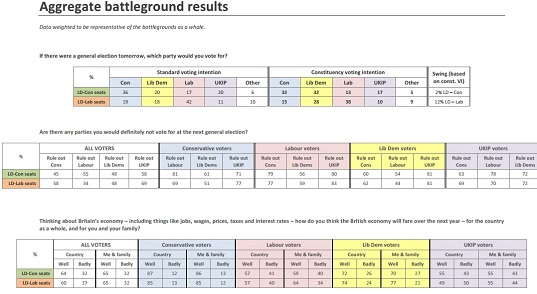 All the Lord Ashcroft polling is available here.

What makes the Ashcroft polling so good is the large sample sizes in each of the constituencies (usually around 1,000, which is the same as some of some GB wide VI polls), so we can draw definitive conclusions.

Note: Re Watford, the Ashcroft polling has it as a Labour gain, but the fieldwork was conducted before the Lib Dems selected their Mayor as their candidate, even before that, the Lab only had a lead of 4% of the Lib Dems, and only 2% ahead of the Tories.

But should Ed Miliband start measuring up the curtains for Downing Street? In October 2009, the politics home marginals poll had the Tories on course for a majority of 70.Â As Lord Ashcroft notes today “Most of those who have switched from the Tories say they will still consider voting for the party next May……But to most people the election might as well be eight years away, never mind eight months. Most of the uncommitted voters who took part in my research had given it little or no thought and did not intend to until much closer to the day. There is still time for the Tories to their fortunes around before next May.”

What I told the Tories in Birmingham – text of my presentation this afternoon, plus slides, now at LordAshcroftPolls: http://t.co/lq8UmBMwhS