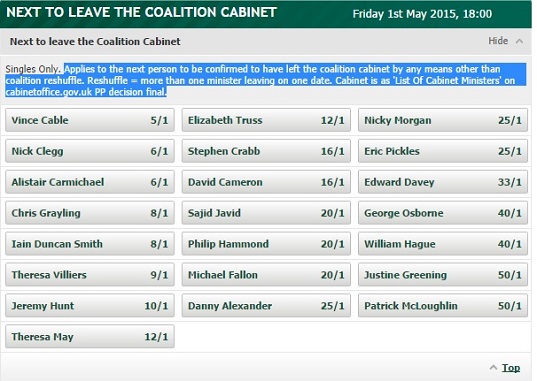 Given he was 1/3Â Â and 5/6 at various stages last week, I thought the 5/6 was value, with the stories in the summer he would make room for JoÂ Swinson, so I’ve taken advantage of the 6/1, I expect this price won’t last long.

Note, Paddy Power’s ruling on what constitutes as next minister out. “Applies to the next person to be confirmed to have left the coalition cabinet by any means other than coalition reshuffle. Reshuffle = more than one minister leaving on one date. Cabinet is as ‘List Of Cabinet Ministers’ on cabinetoffice.gov.uk PP decision final.”

So if there is a wider reshuffle at the same time, this bet won’t be a winner, but I think he will be the only Lib Dem casualty, and the Tory reshuffle back in July was scheduled to be the last Tory reshuffle before the General Election, it makes the bet attractive in my opinion.