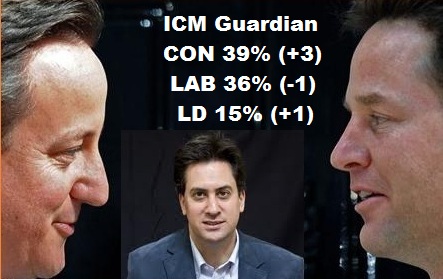 If it should be that the Conservatives are not in government after the next general election then a lot of the blame will be attributed to the March 2012 budget and the way the government reacted in the weeks and months that followed.

Until that point in the electoral cycle, as the ICM poll for March 2012 illustrates, the Tories were doing quite well and all the focus was on Ed Miliband and Labour.

Then came the budget which even before Mr. Osborne sat down was being dubbed the omnishambles. It started with Tweets on the #grannytax then the #pastytax, the #charitytax, the #churchestax and the #caravantax.

Many of the controversial measures were later reversed after much pressure adding to the impression of chaos and raising questions about the governmentâ€™s political abilities.

It was the perception of political incompetance that was most damaging and this, Iâ€™d argue, is more important than being seen to be â€œgood on the economyâ€.

The problem was that it was 2012 the budget that Osborne reduced the top rate of tax for top earners from 50% to 45% and everything else he did was always going to be contrasted with what was dubbed the â€œmillionairesâ€ tax relief.

March 2012 marked the start of a decline in the Tory polling position from which the party has yet to fully recover. It probably, also, was the backcloth for the rise of UKIP.

Osborne did not make the same mistakes in his 2013 budget and my guess is that his Wednesday statement will be the best of his chancellorship. It needs to be if he is to have any chance of succeeding Mr. Cameron as CON leader.