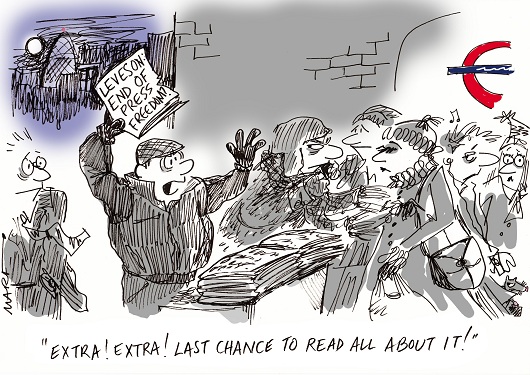 Press, public and politicians â€“ who needs defending from whom

It was no doubt a coincidence that Andy Coulson and Rebekah Brooks were in court in relation to the charges against them over the phone hacking scandal on the same day that newspaper and magazine publishers were also in court seeking to prevent the granting of a Royal Charter on press regulation.Â  Nonetheless, the former made a somewhat ironic backdrop to the latter.

Not that itâ€™s just the tabloids.Â  The Guardian caught an almighty dose of self-importance when one of their writersâ€™ partner was detained at an airport over the summer, when they essentially claimed that journalistic material was somehow a separate and higher class of property, equivalent to the contents of a diplomatic bag, even when itâ€™s suspected of being stolen or a threat to national security, or both.

Similarly, the instinctive reaction of the BBC was to rail against â€˜political pressureâ€™ when questions were raised this week about its governance, even as the scandal over historic sexual abuse allegations against current or former BBC staff rumbles on.Â  Many of these allegations remain sub judice and we must maintain the principle of innocent unless proven guilty.Â  It would just be nice if that principle were applied by the media to people they find interesting, in spirit as well as letter; in inference as well as in fact.

Which brings us back to the question of regulation.Â  Leaving individuals aside, if thereâ€™s a common thread running through these various scandals, itâ€™s the industrial sense of entitlement and impunity; one justified by the self-declared mission to hold the rich, famous and powerful to account.

Not that this is anything new.Â  I was recently reading a book written by a long-forgotten journalist about his experiences reporting the happenings at the League of Nations during the twenties and thirties.Â  He pronounces that â€œof the three orders which comprise our new World State in embryo [by which he means The League â€“ not the best of analyses given that the bookÂ was published in 1937] â€“ the statesmen who represent the governments of the world; the secretariat which represents the first international civil service, and the journalists who create and reflect world opinion â€“ it is the journalists and not the ministers who are the real representatives of the peoples.â€

That deeply corrosive and undemocratic mind-set persists and has led to the logical next step: that if the media represent the people, then it is they who must hold governments and politicians to account.Â  It is why the media struggles with the legitimacy of regulation as a concept, never mind in any practical application.Â  Of course, the political class arenâ€™t immune from mutually covering up would-be scandals of their own and the press does have an invaluable role to play in investigating, campaigning and reporting â€“ when done responsibly â€“ and it needs to be free to do so.

Even so, the idea that in a democratic system it is the media and not opposition parties, backbenchers and ultimately the public who hold a government to account has to be challenged, not just because itâ€™s false but because the belief that itâ€™s true lies behind the sense of justification in the mediaâ€™s more squalid actions, even when they have nothing to do with politics.Â  Itâ€™s a license: because we hold politicians to account they canâ€™t regulate us because that would strike against the public interest we perform; because no regulatorâ€™s said we canâ€™t act in a certain way, we can.

As with all the best constitutional settlements, the key is not in the theory but in the practice â€“ and thatâ€™s guaranteed not by rules but by self-restraint.Â  The best indicator this week that many in the media still donâ€™t get that was the court challenge against the Charter.Â  The irony is that had they understood that, the Charter and regulator wouldnâ€™t be needed in the first place.