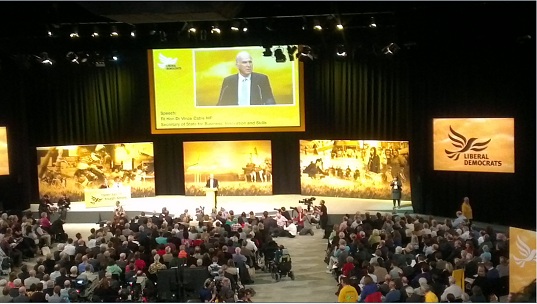 Henry G Manson on the start of conference season

Lord Oakeshottâ€™s interview in The House magazine will capture the headlines because of his claim Nick Clegg will cost the Liberal Democrats a large amount of seats. One thing he does point to is less contentious but almost as significant â€“ May 2014 Oakeshott believes “this will be much the biggest test we’ve had on a nationwide basis of our support and our appeal since the general election, so that’s why it will be crunch time.â€

Heâ€™s right and the yellow party could be set for a historic drubbing as a result. Not only has public opinion moved against the Liberal Democrats since the last European elections in 2009 having formed a coalition with the Conservatives, but the emergence of UKIP is providing an alternative anti-establishment outlet for voters robbing the yellows of one element of their appeal.

The Liberal Democrats have historically been expert at maximising their resources in by-elections. The Eastleigh by-election has produced relative stability in the party and may even have secured Nick Cleggâ€™s leadership until the election. This was only possible because of a huge effort mobilising activists from all over the country. The Lib Dems have also historically been savviest at targeting seats at a council level too. However European elections are now the most demanding of all.

2009 saw the Liberal Democrats win 11 MEPs – just two shy of Labour. The Liberal Democrats have MEPs in every single English region and in Scotland. They can claim to be a truly national party â€“ but now it is logistical nightmare for a party that is short of funds and activists when the elections are conducted at a regional level with no local targeting.

From a Liberal Democrat perspective there are lots of voters in inefficient areas to attract with little canvassing record to rely on to attract and identify support. Thereâ€™ll be little sympathetic national media exposure of Nick Clegg. So there will have to be targeting – but Lib Dem activists can only be in one place at once. But where? Do they focus their European efforts within constituencies on their list of Westminster battlegrounds a year before the general election, or do they run regional campaigns and risk spreading their limited resources too thinly? Can a â€˜national partyâ€™ justify directing much of its resource to Scotland and the South West where it has most MPs defending Westminster seats? And how much of the partyâ€™s resources should be held back for 2015?

The Liberal Democrats canâ€™t afford to sit this contest out. Its enemies are everywhere yet its targets are nowhere. If the party lost it MEPs in 4 regions then that would be a double blow. In some areas the MEP is also a focal point of activity and helps the party attract additional media coverage to MPs and provide further resources for activists. Remove them and the local party infrastructure is damaged and morale drops as popular party figures lose their seats because of the partyâ€™s unpopularity nationally.

It is almost certain that the Liberal Democrats finish fourth. But where they keep MEPs will be significant. In this key national test, it is quite likely the Lib Dems will no longer be a national party. And that could give a glimpse of how 2015 may work out for Cleggâ€™s party. “Crunch time” indeed.