Following on from the House of Commons vote on military action in Syria, Labour sources claimed that William Hague, the Foreign Secretary, was â€œvery, very angryâ€ and threatened to quit over David Cameronâ€™s decision to go straight to a parliamentary vote.

Based on Yes, Minister’s first rule of politics: never believe anything until it’s been officially denied, the value may have gone out of backing Hague as next out of the cabinet, where he is currently favourite at 5/1, it maybe worth checking out the next Foreign Secretary market that Paddy Power have. 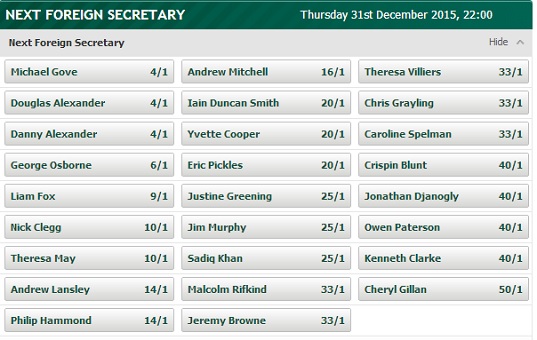 So who could it be were Hague to go? I’ve backed the following two (assuming that Dave wouldn’t like to move Theresa May, George Osborne and Michael Gove from the roles they currently occupy)

1) Owen Paterson, who has impeccable Euro-sceptic credentials, from his comments last year such asÂ We want our country back from EuropeÂ or back in 2011, when he became the first Cabinet Minister toÂ breaks ranks with the Prime Minister over Europe andÂ call for a UK referendum if the EU agrees major treaty changesÂ and earlier on this summer Â saidÂ Â “My view is very clear. Iâ€™d like to make laws in our own Parliament.”Â As an aside, I’ve been impressed by his arguments for genetically modified foodsÂ and the 40/1 are very generous in my opinion, so I’ve backed him.

2) Andrew Mitchell, following on from his resignation over Plebgate, it seemed unlikely he would ever return to cabinet, but thanks to Michael Crick’s excellent work on the story, a return seems likely. There have also been reports that David Cameron is keen to bring him back.Â That said, his legal action against The Sun hasn’t begun well and may well end before it has started, which could effect leave him in limbo, as he not been able to disprove the Plebgate stories, which may make a return problematic.

He has been talked about as our next EU Commissioner,Â the downside for Dave is that it would trigger a by-election, and he may not wish to have a by-election even in one of the Conservative Party’s safest seats, especially with UKIP riding high in the polls, UKIP winning a Westminster seat in a by-election would trigger an existential crisis for Dave and the Conservative Party, and that is something he is keen to avoid, this side of the General Election.

On that basis I’ve backed Andrew Mitchell at 16/1 as next Foreign Secretary.