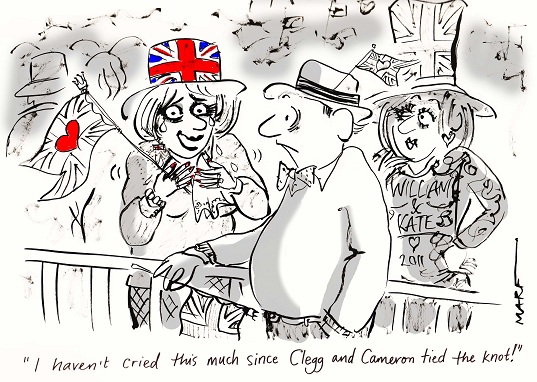 This Marf cartoon first appeared on their wedding day

Is form a guide to value?

In around a month, Britain and â€“ at least for the time being â€“ fifteen other states around the world will have a new third-in-line to the throne.Â  Itâ€™s an event for which there are several betting markets, some more practical than others.Â  As with most markets, correctly predicting the outcome is a combination of luck together with understanding the nature of the event, past form and the participants this time.

As with all markets that depend largely on one or two peopleâ€™s input â€“ a US presidential running mate, the next football manager for whichever post etc. â€“ thereâ€™s an element of lottery about it but even so, these are rarely wholly free choices so there is a basis to work on.Â  Thereâ€™s also scope for market movements based solely on unfounded rumour and indeed, market momentum itself.Â  Thatâ€™s already twice occurred in the Baby Name market, with Alexandra and Charlotte both having been backed strongly at times.

That ought to suggest theyâ€™re too short now, and Alexandra probably is.Â  Both do however strike the right balance between tradition and newness and there may be a little value in Charlotte as an option.

That said, the market overall is heavily skewed towards girls, with the top five, and eight of the top nine being girlsâ€™ names.Â  Thatâ€™s undoubtedly due to the Duchess of Cambridge apparently stopping herself midway through a sentence which referenced a daughter.Â  Maybe.Â  On the other hand, the Palace stated on Thursday that the royals didnâ€™t know the sex of their child.Â  If you believe that, thereâ€™s huge value in backing the gender to be a boy (2/1 with Ladbrokes, for example), though arguably a better strategy would be to go with a spread of names.

Of those top eight girlsâ€™ names, besides Alexandra (4/1, Ladbrokes) and Charlotte (8/1, also Ladbrokes), another to avoid is Diana (7/1, Paddy Power).Â  Thereâ€™s certainly a strong chance that Williamâ€™s motherâ€™s name will feature if itâ€™s a girl, but as a middle name, not the first one.Â  Likewise, the other joint-second favourite, Victoria (7/1 widely) is surely a bit of a millstone to hang around the neck of a future monarch, and Eleanor (12/1, Hills) and Alice (16/1, Coral) seem a bit long-shottish for their prices.Â  In terms of outsiders, Phillipa (50/1, PP, Coral) might have some value, referencing as it does both sides of the family.

If itâ€™s a boy, although he would have a courtesy title (presumably the Earl of Strathearn), heâ€™d be no doubt popularly known as Prince [Whatever].Â  As such, Iâ€™d be inclined to discount the names of other current senior princes: it would be confusing were there to be two Prince Philips, or Prince Charleses, for example.Â  Similarly, given his future destiny, we can almost certainly rule out names associated with failed or controversial reigns â€“ Stephen, John, Richard and (much as it pains me to say so), David.

Ruling those out leaves a number of credible options: George (12/1 widely) is boring but a royal favourite, Edward (40/1, PP, Coral) is similar but three times the odds, and Henry (50/1, Coral) doesn’t quite clash given that Prince Harry is known by that alternative.Â  Given the shortness of Alexandra, the masculine equivalentâ€™s odds of 50/1 (Betfred, Coral) seem attractive.

As a summer distraction from weightier matters, itâ€™s not a market to take too seriously.Â  Thatâ€™s not to say though that it shouldnâ€™t be possible to identify value potential winners.