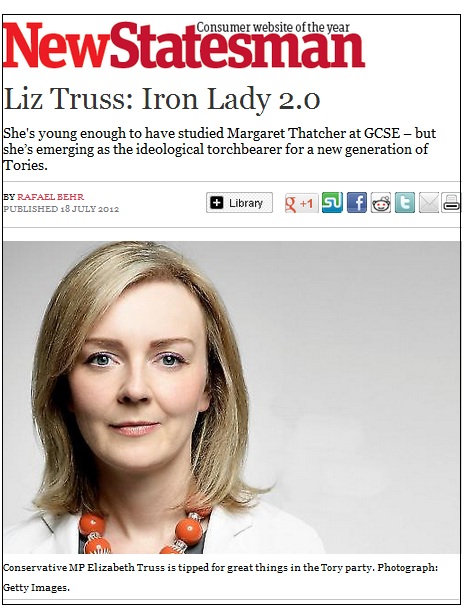 Might the comprehensive school girl from Leeds make the cabinet?

It’s being said that Dave is planning a reshuffle in July in what will probably be the last big shake-up before GE2015.

For those Tory MPs elected in 2010 who aspire to high office this is a big moment and a key question will be whether any of them make it to the cabinet.

Given that it is hard to see anyone getting such a promotion who is not already a minister the number of possibles is quite small.

One who last year was being portrayed as the new Mrs Thatcher, is Norfolk SW MP, Liz Truss who has had an increasingly bigger public role in recent weeks. She went into battle against Nick Clegg on the childcare reforms and yesterday was touring the TV studios putting the government’s case on exam reforms.

At the moment she’s a junior minister at education so a jump to cabinet rank might be too big an ask. But with at least half of the Tory cabinet women said to be “at risk” there might just be an opportunity.

One thing’s for sure – Dave is not going to cutback on the number of female cabinet ministers.

Ladbrokes make her a 50/1 shot to be next CON leader. That might be worth a punt.

Those Thatcher comparisons from a year ago are not going to do her any harm whenever a leadership election occurs. Having achieved cabinet status by then could make a difference.