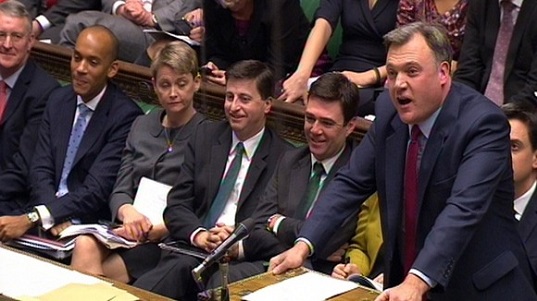 One of the charms of the Westminster system is that Cabinet ministers still have contact with the electorate through their surgeries and case work. Itâ€™s a reality check. In other electoral systems Ministers are not constituency MPs. However the make-up the voters that have the ear of Cabinet and Shadow ministers matters and theyâ€™re not always representative.

Earlier this week Patrick Oâ€™Flynn at the Express argued how some of the Conservative Partyâ€™s current problems related to the fact that hardly any of their Cabinet Ministers werenâ€™t in marginal seats.

In fact only 3 of 24 Conservatives who attend Cabinet have a majority less than 10,000. According to Oâ€™Flynn this means that they donâ€™t have the same feel for the concerns of swing voters and end up down electoral cul de sac by spending political time and capital on issues such as â€˜gay marriageâ€™ rather than addressing the cost of living. It’s an interesting argument and raises wider questions.

Why would party leaders pick their top team from people who donâ€™t represent the type of seats they need to retain and win? From day one the political advancement game is geared up for those MPs with safe seats. I

f you have to spend every weekend campaigning and being visible in the constituency then that takes you away from raising your profile at think tank events and conferences, speaking at other Constituency Associations or CLPs or having the time to write a pamphlet on this or that, no matter how much youâ€™d be keen to do that.

Tough choices have to be made and most MPs with a small majority will opt for self-preservation over self-advancement.

Reaching the top doesnâ€™t happen overnight but is the product of furious lobbying, schmoozing, self-improvement and hard graft. But what plagues many MP’s doors is the raw electoral risk of losing the seat on your way to the top. The ebb and flow of elections â€“ a 5% swing here, a 3% swing there has wiped out many MPâ€™s promising careers before theyâ€™ve begun.

Whereas over half of MPs effectively have a job for life and political longevity is fundamental to success. As your government becomes less popular in office, a minister with a slight majority inevitably becomes a bigger target and potential scalp for opponents.

There are some parallels between from Oâ€™Flynnâ€™s analysis of the Tories and with the Labour Party. I can see some of the risks already. As important as the bedroom tax, benefit changes and unemployment are, theyâ€™re bigger issues in the poorest areas â€“ those that tend to already return Labour MPs with big majorities.

Thatâ€™s not to say there isnâ€™t a moral case for Labour raising but that itâ€™s about recognising itâ€™s going to resonate differently. The red team shouldnâ€™t rely on the experiences of their own constituents being enough to drive voters elsewhere back into the party’s bosom. However the parallels aren’t quite the same.

If O’Flynn is right then having some Shadow Cabinet members with marginal majorities could be a useful advantage for Labour to have over the Conservatives and keep some of their colleagues in touch with the sort voters that will determine elections.