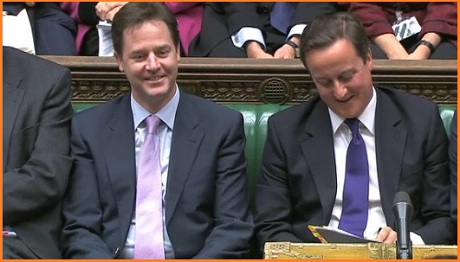 It is not unusual for the Queenâ€™s Speeches of any given government to thin out as the parliament progresses.Â  Inevitably, those policies it ranked as most significant when it took office are likely to be introduced first, alongside the quick wins that help it to generate its own momentum.

Consequently, by the second half of the parliament, whatâ€™s left are policies which are either complex or of secondary rank, either of which can be put off further, particularly if there might be difficulty passing and implementing the legislation when the benefits wonâ€™t be felt until after the election.

Of the two most recent legislative rows, one is likely to hasten that trend and the other is already a symptom of it.Â  David Cameron has advocated the equalisation of marriage laws for gay couples for some time but the political fallout from the initiative for the Conservatives has been so damaging that he must be wondering whether it was worth it, or at least, whether it was right to introduce the change as a government bill.Â  He certainly ought to be wary of tinkering with any other issue likely to be controversial with his own party.

On the other hand, the non-inclusion of a referendum bill is a good example of the dangers of inactivity: others will seek to fill the gap, no matter how improbable it is that the legislation will pass (a consideration governments must take account of while backbenchers need not).

This government has a particularly acute issue with the interplay between the electoral cycle and its legislative programme; namely its being a coalition.Â  Any new initiative a minister comes up with is likely to find strong opposition within the ranks of MPs behind him or her when the range of views held is as wide as it is.

That their two parties are to some extent seeking to maintain a distinctive identity merely adds to their incentive to rebel.Â  (Any measure that could unite the Lib Dem left and Tory right would probably be so uncontroversial that youâ€™d have to ask why it hasnâ€™t already been implemented).

Pointing out that the opposition and hence party splits doesnâ€™t do much for the reputation of the party concerned is beside the point: those aggrieved will argue that theyâ€™re in a no-win situation, having to choose between supporting legislation they disagree with, or the create more splits which the opposition and media will play up.

Their argument would be that the legislation shouldnâ€™t have been tabled in the first place, and perhaps they have a point (though not in the case of the EU referendum, when it was the rebels who raised the issue).

A danger with a reduced scheduled programme is that it leaves space for badly thought through ad hoc initiatives.Â  Initiativeitis can plague any government but those suffering poor press or polling are particularly susceptible as they seek to re-establish control of the agenda. Â The politicianâ€™s logic identified in Yes, Prime Minister â€“ â€œsomething must be done; this is something; therefore we must do itâ€ â€“ is rarely more strongly felt than in such situations.

Assuming that little further reform is possible before 2015 beyond that already in the pipeline, what is there left for the government to do?Â  Quite a lot, in fact.Â  Put simply, itâ€™s to get the existing services it controls, and the wider economy and society it influences heavily, working more smoothly.Â  There are also the challenges of the day-to-day running of the country, such as responding to last weekâ€™s terrorist attacks.

It may not be terribly exciting nor particularly ambitious to cease further new reforms but such criticism misses the point.Â  If introducing the reform is more trouble than itâ€™s worth â€“ and the breadth of the coalition means it probably will be â€“ and thereâ€™s not time to prove the benefit of the change, then why go through the pain?Â  Masterly inactivity takes discipline, itâ€™s true.Â  It just doesnâ€™t take as much as any other option.