A lot of factors go into a voter’s decision of which party (or none) will receive the little mark on the ballot paper next to their name; issues, party image (present and past), local situation are all in the mix somewhere alongside other factors, arguing about the exact recipe keeps professional political scientists (and amateur psephological nerds) in comfortable arguments.

For some time now YouGov have been running two types of regular issues polling, one asking which party they support most on a number of issues, another about the importance of various issues facing the country. Frustratingly there isn’t a total overlap in the issues on each index, but there is a large amount of similarity between the two (of the 12 issues listed on the importance index, 7 of them are put through party preference polling) and that similarity sent me on a task to cobble together an overall issues rating for each party.

I took the 7 issues and used the importance index to weight them against each other in importance, then applied the party preferences on each issue to come up with a set of overall party ratings on the issues (here separated into people’s responses on the importance of issues facing the country, and issues facing â€œyou and your familyâ€). I’ve excluded None and Don’t Know answers here, but will have them in a future article based on the same calculations.

The caveats are many given since I (alas) don’t work for YouGov there’s nothing I can do about the incomplete overlap of the issues so this index is held together by statistical spit, string, and sticky-back plastic. Mike’s regular cautions about using non-VI polls to predict votes also apply here. Nevertheless undaunted by all those fascinating technical difficulties here are some numbers for you to look at and use/misuse/dismiss at your leisure and convenience. 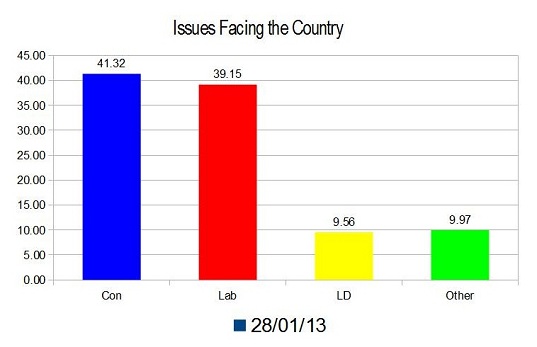 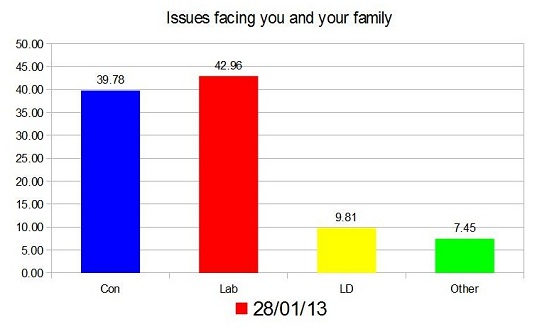 The results themselves hold some resemblance to the overall VI figures (on the date of this polling,Â  Con: 33 Lab 42 LD:11 Other: 14) with the Conservatives being the big movers up to leading on issues facing the country but trailing on issues facing ‘me and my family’. If you combine the two it leaves Labour as very slightly ahead overall.