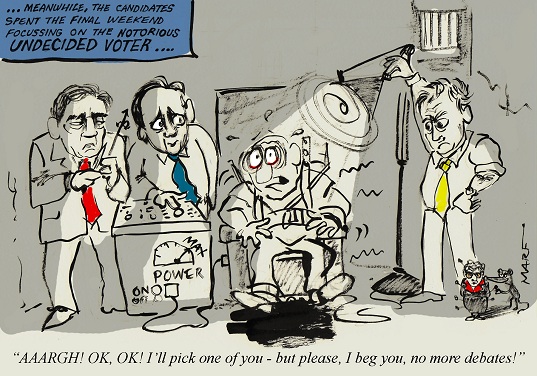 Grant Shapps has not thought this one through

While all eyes have been on UKIP and Rotherham what for me was the biggest general election news over the weekend has been largely ignored.

This was the comment by Tory chair, Grant Shapps, that Dave might not take part in TV debates in the run-up to the next general election.

Given the impact that the debates had in 2010 this could have a major impact on the very nature of the election campaign. As will be recalled from 2010 the whole narrative was shaped by the debates and the party machines found it harder to get their pro-active points across.

Cameron was widely criticised by his side in the election aftermath for agreeing to the debates in the first place and for allowing Nick Clegg to be there as well.

But, surely, the genie is now out of the bottle and it’s going to be more difficult for any of the leders to refuse. They risk being accused of running scared and, you can see the word “CHICKEN” playing a big part.

A real problem could come if one of the broadcasters, possibly Sky, says that it will be going ahead anyway and if Dave doesn’t want to attend there will be an empty chair.

There are legal issues on this but I cannot see Adam Boulton, who played a big part in getting the principle of TV debates established, dropping this lightly.

And what a new line of attack the Shapps comment provides for Ed Miliband. You can see him bringing it up at PMQs whenever Dave seeks to evade a question.

My view is that the downside of not going forward is greater than the risk of having them. Shapps is making a big mistake.