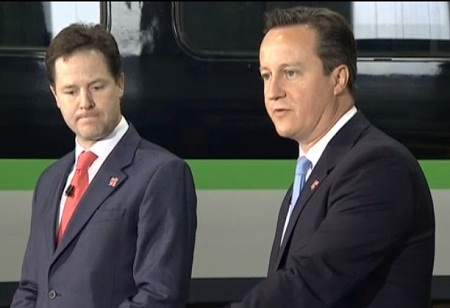 There are two issues that could potentially propel the Liberal Democrats from the Coalition. The first is Europe. The second is military conflict with Iran. Both are core issues for the handful of Liberal Democrats I knock about with from time to time. While Cameron should be able to limit the stress and strain Europe plays on his coalition by keeping most of his pledges until after this parliament, Iran is far less predictable and more combustible.

Foreign affairs barely featured at Liberal Democrat conference this year. Yet despite this there is some unease that the removal of Lib Dem Ministers from the Foreign Office in the reshuffle may be in anticipation of an Israeli and US backed conflict.

The well-respected former minister Nick Harvey MP has pondered as much. Liberal Democrats have a manifesto pledge against military action against Iran. I know what youâ€™re going to say – not worth the paper itâ€™s written on etc. But at least itâ€™s indicative of the strength of feeling within the party that the mistakes of Iraq should not be repeated.

A Romney Presidency would be much more likely to provide military backing to Israel against Iran. The Republican candidate has already criticised Obama for â€˜outsourcing foreign policyâ€™ to the United Nations. In the scenario of an Israeli pre-emptive strike and US backing outside of the UN what would our governmentâ€™s position be? Will it possible for Cameron and Clegg to negotiate their way around this issue? Could you have a Coalition government opposed to each other on such a key issue?

My gut feeling is that there will be little public appetite for Britain to send troops to another conflict should a dire escalation of events take place.

There will however be plenty in the Conservative Party, particularly around Atlanticist hawks such as Liam Fox, who would expect to see the government provide support to such military action.

If Nick Clegg lined up with Conservatives in support of military action in Iran it would not be inconceivable to see it leading to further divisions in the party and a leadership challenge. The role of Paddy Ashdown in these circumstances could be critical. These would be unchartered waters for our government and if could quite easily finish off Clegg and the coalition.