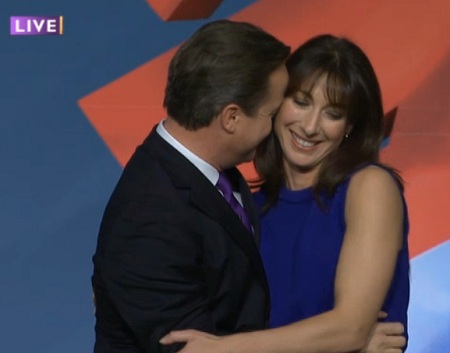 At the start of the week the President of YouGov, Peter Kellner, declared that the Conservatives would “need a miracle” to win an majority at the next election.

As things stand at the moment that must be right. Even protecting the 100 or so gains secured in 2010 is going to be a mammoth task and Labour are firm favourites in the betting to win most seats if not a majority.

Yet today’s speech had a lot of merits. Cameron articulated his vision of conservatism in a way that won support from most factions in the party. Even Nadine was positive.

Well, that was one strong and excellent speech. Well done DC. Praise always given when due. *swallows hard*

All the talk of aspiration appears good but will it resonate? Can we expect to see an uptick in the Tory polling position?

We’ll need to wait a couple of weeks but my guess is that we will.

One of the factors dragging the Tory share down with the top end phone pollsters has been the very high proportion of 2010 Tory voters now saying they “don’t know”.

In the latest ICM survey one in five CON voters from 2010 were in that category. If the upbeat clearer message from Birmingham resonates then there’s a lot of potential for progress.

But the overall targets are massive. The Tories fell short at the general election even though they secured 7.3% more votes than Labour. With even ICM having double digit LAB leads that requires a very big turnaround.