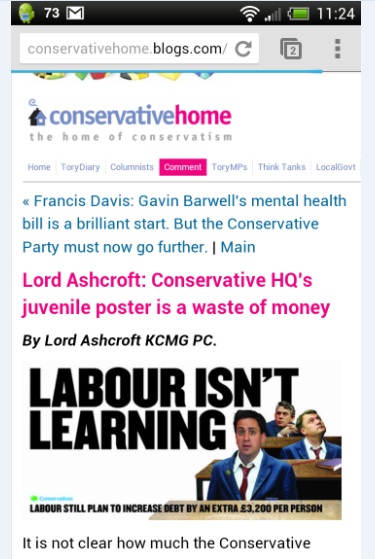 Earlier this week Michael Ashcroft wrote an insightful post for ConHome attacking the campaign poster which the Tories produced for the Labour conference.

He described it as a silly stunt which does not sit easily with the qualities a party of government should be able to claim for itself.

He goes on:”.. The next election will be decided in marginal seats by often people who will in many cases be anxious and confused about the country’s direction and their own prospects. These are the people at whom our campaigning activity should be aimed. Is this poster supposed to be aimed at them? Surely not. So who?

..As I said after the 2010 election in Minority Verdict, it is easy to see why people in politics produce material like this: attacking your opponent is easier, not to say more fun, than setting out what you stand for and what you want to do. The Bottler Brown beer mats marking the non-election of October 2007 are another example. Such things may produce a welcome chortle in the office but to assemble a winning coalition of voters we must show strong leadership, display the right priorities, demonstrate that we’re on the side of the right people, and offer reassurance about our character and motives. Behaving like grown-ups would be a good start.”

I wonder how Ashcroft is going to react to the latest news. For rather than this just being something linked to the LAB conference in Manchester Tory members and supporters were sent emails during the week saying that the campaign is going national.

Ashcroft is being ignored something, I’d suggest, the party does at its peril.