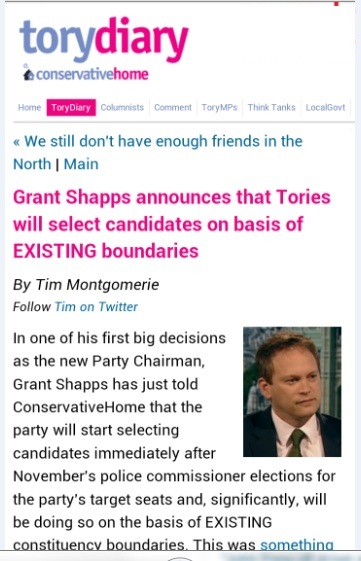 Candidates will be selected on the old electoral map

When Nick Clegg made his statement in the middle of the Olympics that his party would be voting against the Boundary Commission proposals when they come to the commons in October 2012 it created something of a dilemma for the Tories.

Should they start the process of selecting candidates on the existing boundaries or wait in hope that the news ones would be approved?

This was the more so when immediately afterwards both the red and yellow teams made clear that theit selection of candidates for the 2015 election would take place on the basis of the old boundaries.

Initially it was thought that the Tories wouldn’t follow suit in order to keep the pressure on Clegg. That’s now changed with the Shapps statement to ConHome.

Itâ€™s generally regarded as good campaigning practice to get your choice made early so that the Prospective Parliamentary Candidate can build up a presence in the area. This is particularly important in the marginals where the odd few hundred votes can be decisive.

Shapps is bowing to the inevitable.