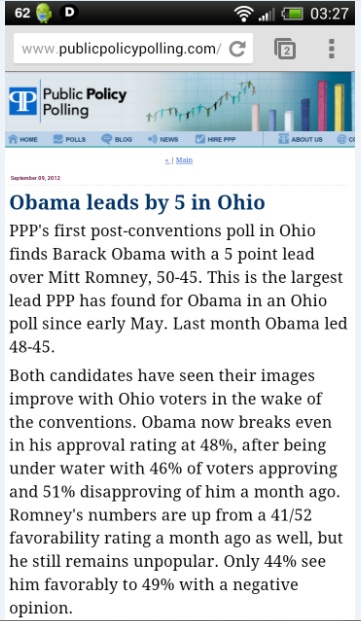 On Betfair he’s 32.2% chance down 5 since his Tampa speech

It is always said that there are three critical points when a challenger in a presidential race can change the narrative and his prospects. The first comes, usually in the August, with the choice of the V-P nominee. The second comes with the party national conventions and thirdly there are the debates.

We’ve now completed two of those and Mitt Romney is still waiting for his breakthrough in both the national and battle-ground state polling. The latest Gallup and Rasmussen daily trackers have Obama edging up to leads of 5% and 4% respectively.

Those are national polls but it’s the positions in the key battle-ground state that matter most – and nowhere is as important as Ohio. Overnight we have seen the first Ohio poll since the conventions, from PPP, which has Obama extending his lead from 3% in August to 5% now.

It’s very hard seeing a pathway to a Romney victory without Ohio which is why there is all the focus on it. The ex-governor of Massachusetts needs to be edging closer and that’s not happening.

This is just one pollster in one state and other surveys will be looked at carefully. PPP makes no secret of its allegiance to Democratic party in the same way that other firms lean to the GOP. Earlier in the year the firm came out by a big margin with the most accurate final poll in the Ohio primary.

The big potential game-changer looks set to be the TV debates which start on October 3rd.

For the time being I am sticking with my Obama betting position.