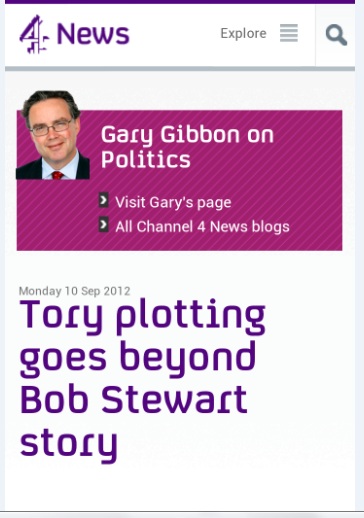 Should you be betting that Dave will be ousted?

The Channel 4 political commentator. Gary Gibbon, has returned to the subject of plots against Cameron following the denial by Tory MP, Bob Stewart, that he was considering acting as a stalking horse.

“…. the grouping I am talking about is quite a bit bigger than two people. It has met a handful of times in the office of a Tory former minister and privy councillor. I believe itâ€™s most recent meeting was this month. It has focused on one of its group being a â€œchallengerâ€ to David Cameron. That individual is more prominent than Bob Stewart in Tory backbench circles and is someone who would know their way round the party rules very well.

Members of the cabal talk of maybe running the candidate in May next year after, what one predicted, were bound to be dreadful results at the Corby by-election and the local elections in May 2013. I mentioned before the caveat that the conspirators I spoke to acknowledge that their plans could founder if the economy revived. I also said that they were, as one said, just beginning to move from â€œcontingency to challengeâ€ â€“ ie, they have started to move in their discussions from thinking who theyâ€™d rally round if David Cameron fell under a bus to beginning to think of hiring a bus driver.…”

Clearly Gibbon has got something but it’s hard to assess how much weight to place upon it.

Certainly when parties start to face election defeat and MPs contemplate losing their seats/jobs/salaries then thoughts can and do move to changing the man at the top.

I’m not yet convinced but this is one to watch.

Ladbrokes are offering a skinny 3/1 that Dave will go before the general election. I’ll need longer odds than that.