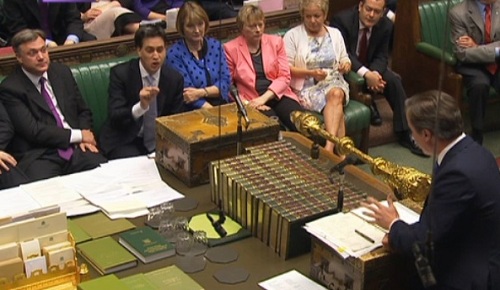 The Guardian has published an excerpt of their monthly ICM poll.

On the net satisfaction ratings, David Cameron still leads Ed Miliband minus 12 to minus 13.

Following on from the reports on problems in the relationship between Ed Miliband and Ed Balls, the ICM net rating when asked if Ed Miliband is doing a good job is minus 13%, for Ed Balls it is minus 8%.

Balls beats Miliband in part because a relatively high proportion (30%) said they did not know when asked whether the shadow chancellor was doing a good job. This compares with 21% for Miliband who has a much higher profile than Balls.

The VI is (changes in brackets)

The tables can be found here

ICM also asked “Putting aside your own party preference and thinking only about their performance in the job, which, if any of the following do you think shouldÂ lose their job in the cabinet reshuffle?”

These are absolute figures, and unlike Survation’s polling, didn’t include an individual question of should x retain their job.