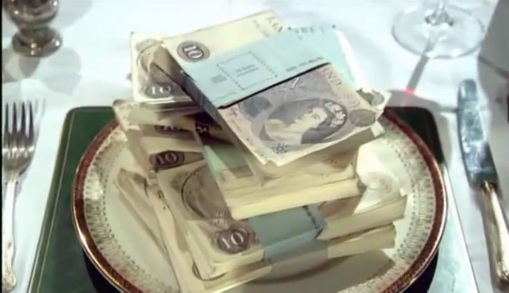 This week a new website calledÂ www.searchthemoney.comÂ has gone online to show what different Conservative MPs are earning or are receiving in donations. The unions behind this clearly see attack as the best form of defence and hope to highlight the link between the finance sector, big business and the Conservative Party. As their adverts on these pages show Michael Gove has already raked in Â£462,223Â above his ample salary.

Itâ€™s actually a very handy site but I think they should add all MPs from other parties in for completion. After all, many would be interested to know that David Miliband charges Â£14,000 Â for just a two hour speech. Or finding out easily who is giving what to SNP MPs.

This all comes in the same week that the Conservative Party is facing calls to hand back substantial donationsÂ from convicted crook Asil Nadir. The Liberal Democrats also have form having unknowingly filled their boots with the cash from fraudsterÂ Michael Brown.

I canâ€™t think of a worse time to make the case for wide-scale state funding of political parties so where do we go from here?Â Â Is it enough to provide improved transparency or do we need tougher donor or party spending caps? For now thereâ€™s a sense that money talks and thatâ€™s not healthy.

I glimpse across at the situation in the US and shudder. There’s got to be a better way forward in Britain, but finding a consensus from the political parties wonâ€™t be easy.