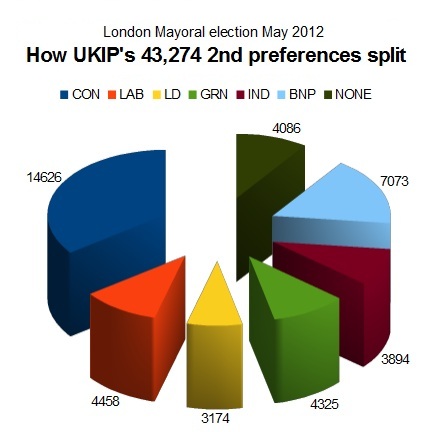 Tucked away behind the Times paywall is a story this morning about a new ComHome survey of the so-called “Tory grass-roots” that suggests that a significant proportion think that a deal with UKIP would boost their chances at the next election.

It says that “Six out of ten think such a move would boost the partyâ€™s electoral hopes by bridging the divide on the right of British politics”.

But is this right? Aren’t the ConHome users who took part in the survey basing their view of UKIP on a false premise?

The best data to look at are real votes cast in a real election and here we are fortunate that a detailed run-down from May’s London Mayoral election is available and has been referred to on PB before.

These elections, it will be recalled, involve voters being asked to effectively give both a first and a second preference – the latter only having an impact on the outcome if their first choice does not make the top two.

In May, as can be seen from the chart, 43,274 gave the UKIP candidate their first choice. Yet only 14,626 of them allocated their second preference to the Tory candidate, Boris Johnson.

The UKIP logo appeared clearly on the ballot form next to the name of the candidate so there were no branding issues at the point where people were voting.

The split is quite extraordinary with more than 40% of the UKIP backers who used their 2nd preference giving their support to broadly left of centre candidates.

I have included Labour, the LDs, the Greens and the independent in the left of centre camp.

This really does knock the easy assumption that all UKIP backers are Tories on holiday.