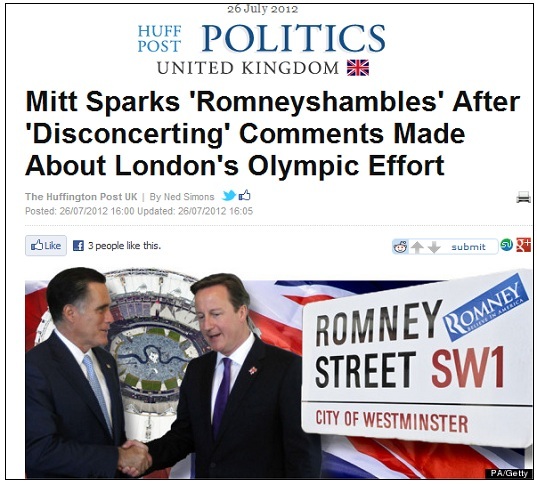 Congratulations to Huff Post, if indeed it was them, for coining the term #RomneyShambles to describe the GOP contender’s critical comments about London 2012. It’s set off a whole series of Tweets and sums up the view on this side of the Atlantic over Mitt’s comments about the London games.

Congratulations as well to David Cameron for his sharp response:-

“”We are holding an Olympic Games in one of the busiest, most active, bustling cities anywhere in the world.

â€œOf course itâ€™s easier if you hold an Olympic games in the middle of nowhere.â€

Middle of nowhere! Could that be a reference to the Salt Lake City winter games that Romney was in charge of?

Whatever it’s not been the finest start to the presumptive nominee’s overseas trip ahead of his party convention and, of course, November’s election.

What worries me is what this says about his approach to foreign relations generally. He could be installed as president on January 20th 2013.