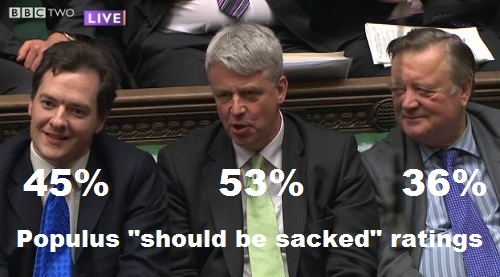 How vulnerable are Lansley, Hunt, May and Osborne?

For me one of the big polling events of the month is the Populus telephone survey for the Times which came out overnight. The headline voting figures were LAB 40 (-1): CON 34 (+1): LD 12 (+3) so quite a boost for the Lib Dems after a difficult week. No separate UKIP share has been released yet.

An interesting aspect in view of the impending re-shuffle, was a brutal question on which of a list of named cabinet ministers should get the boot. The top of the list, with 53% saying he should lose his job, was health secretary Andrew Lansley. This was somewhat surprising given his relatively low profile since his NHS reform bill went through.

There might be ratings for other ministers but these were not included in the report.

On images of the parties there were two findings which show the scale of the damage to the blues over the past four months.

In March 46% told Populus that the Tories were â€œcompetent and capableâ€ – a figure that has dropped now to 34% putting them behind Labour.

In the earlier poll 42% had said that they saw the Tories as united. In the Populus fieldwork over the weekend this was down to 28% reflecting, perhaps, the impact of last week’s big Tory back-bench rebellion.

As a general rule voters don’t like to see parties that are divided as John Major found in 1997.

Hopefully there’ll be more nuggets when the full data is published.