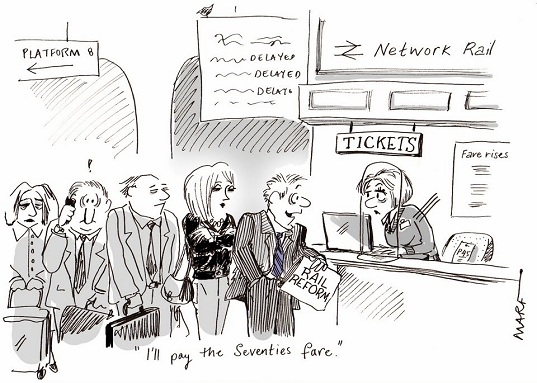 Henry G on whether the party is on the right lines

John Majorâ€™s decision to privatise British Rail is probably one of the least popular privatisations of the Thatcher-Major years. I donâ€™t know anyone who enjoys rail travel in this country anymore. The tickets are extortionate, the services are fragmented and the feculent odours of Virgin Cross Country train is not quite the private sector innovation the public were promised.

Yet for 13 years New Labour saw next to no change. More was spent on private franchises but with limited returns. The political fear at the time was clearly that anything smacking of â€˜nationalisationâ€™ would damage the New Labour image. On Sunday that changed. The Observer announced that the Labour Party is now set to consider plans to return Britainâ€™s railways back into public ownership. This comes as a new report has been published explaining how the Government could reacquire franchises on a piecemeal basis as they became available for renewal or if rail companies fail to hit the standards required.

The union-funded report is an interesting read. It argues that privatisation has cost the country at least Â£1.2bn per year that if directed towards ticket prices would reduce fares across the board by 18%. There are lots of technical arguments for and against and comparisons with other EU countries which are far better served by their railways. But in many ways that isnâ€™t the main story. What is striking about Labour putting this into the policy mix is that it would mark a clear break from New Labour and likely represent one of the first policies to fly off Jon Cruddasâ€™ policy conveyor belt.

By all accounts Maria Eagle has been considering something dramatic along these lines for almost a year, but under Cruddasâ€™ predecessor Liam Byrne there was never likely to be much appetite for anything outside of the New Labour playbook. Eagle is a close ally of Cruddasâ€™ and the new Chair of the Policy Review has been cheered by her boldness and recognition that new policies need to cut through to the voting public.

Bringing rail back into public ownership reflects Cruddasâ€™ style â€“ policies that can be explained, understood and sold on the doorstep. More than that they help demonstrate the values Ed Miliband has been sketching out.

These primary colours are in stark contrast to Byrne’s approach â€“ a man so focused on micro detail that as a minister he notoriously issued civil servants an 11 page memo http://www.telegraph.co.uk/news/politics/3468400/Cabinet-Minister-tells-civil-servants-when-to-bring-coffee-and-soup.html on how and when he wanted his cappuccinos serving.

Politically, rail ownership could prove politically canny move and one of those issues that unite Labourâ€™s lost supporters as well as â€˜squeezed middleâ€™ commuters in the South East. Itâ€™s going to be fascinating to see what else Cruddas conjures up. By appointing him in the reshuffle Ed Miliband may also be introducing something of another new political departure. Over the last two decades Conservatives and New Labour kept many policy proposals under lock and key until quite close to the election, partly for fear of their opponents adopting them and stealing thunder. Weâ€™re in different territory now and I suspect weâ€™re going to see many of Labourâ€™s policies rolled out well in advance to define the party’s differences. Labour is showing growing confidence under Ed Miliband and with his new policy chief at the helm, some early sign of swagger too.