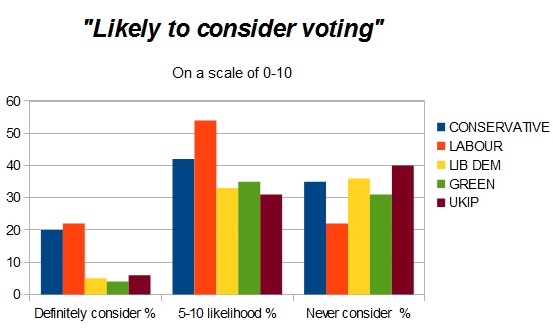 And the blues have got bigger negatives?

The chart above is from a new YouGov poll for Prospect when respondents were asked the following question:-

It should be noted that each respondent was asked in turn about all the parties.

Amongst those who are definite that they would not consider Labour with 22% has the lowest total. The Greens are next on 31% with the Tories having a definite no rating of 35%, the LD 36% and UKIP on 40%.

This looks like really good news for Ed Miliband’s party and shows the scale of the challenge facing the blues.

My reading is that Labour simply have a bigger pool of potential voters to go at. The main caveat is that the polling was taken in early June when Labour had a very solid lead in all the main voting intention polls.