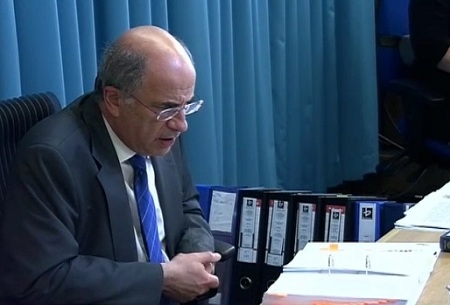 Surely there are vital lessons to be learned?

When something goes wrong, people inevitably look for someone to blame and politicians are often keener than most to assign blame, not least because if they get in early enough, thereâ€™s a better chance that the blame wonâ€™t land on them. All of which makes it surprising that the governmentâ€™s not commissioned any overarching inquiry into the causes of the financial crisis – plainly the biggest thing to go wrong for many a year.

Why not? Partly, itâ€™s because the nature of the crisis has required solutions to be implemented sooner rather than later so the timescales donâ€™t necessarily fit with inquiries which can take years. Also, there have been a series of reports looking a various aspects of the crisis, so itâ€™s not as if itâ€™s gone uninvestigated.

Even so, the Leveson Inquiry deals not just with the specifics of phone hacking but also the culture of the media and its relations with those it reports on. Itâ€™s arguable that given the consequences of the crisis, thereâ€™s a massively greater public interest in investigating not just the details of financial regulations or how well the Treasury performed in the face of the crisis but the systemic failures within the financial sector that allowed it to happen, including corporate culture, governance and competition or the lack of it.

It may well be argued that commissioning such a report would of itself be a threat to The City, which generates a great deal of money for the country and, though taxes, for the Exchequer. It shouldnâ€™t be.

In any case, considering the cost of bailing out failed banks, the net benefit of a dysfunctional financial sector is greatly lessened.

If the government doesnâ€™t have much to lose, why hasnâ€™t there been such an inquiry? Partly, itâ€™s want of time – some solutions need implementing as early as possible and canâ€™t (or shouldnâ€™t) wait years for a major inquiry to report. Itâ€™s also perhaps because it wouldnâ€™t be cost-free. Much did go wrong and blame would implicitly be assigned even if only by juxtaposing what the Inquiry recommended against what politicians did or said at the time. No-one was complaining while it was generating massive tax revenue. Commissioning it would be a hostage to fortune.

Thereâ€™s also the perceived risk to the UKâ€™s financial sector itself. This is believed to earn great amounts of money both for the economy at large and through taxes for the Treasury. That may well be true for exports but itâ€™s a far more nuanced position where itâ€™s UK-based work (as finance acts as facilitator not producer). Not that that would prevent a lot of special-interest whinging at the prospect of excessive profit and inadequate competition (for example) being addressed.

In some ways, the crisis is been so big and so international that itâ€™s not surprising that where questions have been asked, theyâ€™ve been limited. That said, the very act of holding the Leveson Inquiry, never mind the report that will come out of it, has cut out the worst excesses of the media. That lesson could be learned and applied to other sectors too.