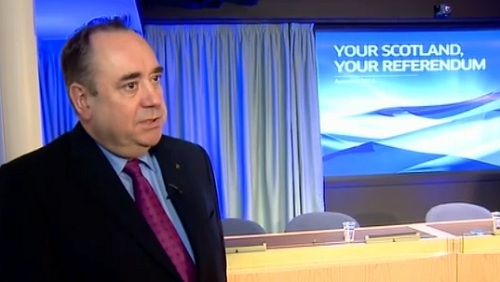 and the 2015 General election?

The Sunday Times reported over the weekend that the no campaign was in disarray, due to major unionist parties donors not willing to donate to the no campaign.

Willie Haughey, a tycoon who has given Labour about Â£1.3m since 2003, is the latest in a series of wealthy unionist businessmen refusing to back the No campaign.

Sir Jack Harvie, a Scottish construction tycoon who has raised about Â£16m for the Tories, has already made it clear he will not play a role despite pressure from within the party.

Lord Laidlaw, one of Scotlandâ€™s wealthiest men, who gave the Tories Â£3m but stopped bankrolling the party in 2009, has confirmed he will not provide support.

By contrast, the yes side has already raised Â£2million.

Whilst there are spending limits in the 16 weeks in the lead up to the day of the referendum, there are no limits, between now and then, a period both sides admit is crucial.

The Sunday Times then said was a reluctance by the no side, to put their head above the parapet because

Of a fear of recriminations from hardline nationalists, dubbed the cybernats, who have subjected opponents of independence to personal abuse online, and cited the example ofÂ Michelle Mone, the lingerie entrepreneur, who has been targeted for abuse after declaring her opposition to independence in an interview with The Sunday Times.

So the no side maybe reliant on the Unionst parties directly, however the referendum is scheduled to take place just over 6 months before the UK wide general election in May 2015, the fundraising activities and funds of the Westminster parties will be focussed on that General election and not on the referendum.

Given that there are few marginals and target seats for the Tories in Scotland, I can’t imagine David Cameron and the Tory party allocating much money towards the no side, even on a very good night, the Tories could expect to win only a handful of seats in Scotland in a General election, I expect pragmatism will rule the day and donors’ money will be used to fund the general election campaign.

The Lib Dems resources will be focussed on defending their seats, additionally, due to their losses in councillors so far in this parliament, their coffers have been reduced, as generally Lib Dem councillors pay 10% of their allowances to the party. So as much at they may wish to fund the no side, they may just not have the ability to do so.

Now Labour is the big imponderable, they have 41 MPs from Scotland so it is in their interest for Scotland to remain in the Union.

If the other two unionist parties are unwilling and unable to contribute much, then it may fall to Labour to make up the shortfall, but with a General Election on the horizon, they may be forced to choose between twoÂ unappealingÂ choices, spend money trying to keep one of their traditional heartlands in the Union, from their general election funds, or try and win a general election without one of their traditional heartlands.

Ladbrokes have a market on the outcome of the Scottish referendum.