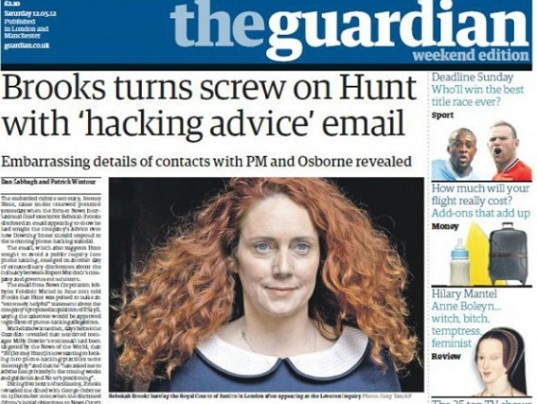 Is he set to become the 4th cabinet casualty?

Rebekah Brooksâ€™ testimony to the Leveson enquiry didnâ€™t produce a smoking gun but will not have been at all comfortable listening for Jeremy Hunt. In particular, the e-mail from Huntâ€™s advisor looks at best like a private office out of control and gives the suggestion of indirect but improper ministerial contact with News International.

However, it is just suggestion rather than established fact and as such weâ€™re into the good old game of a media and opposition minister-hunt. The questions, as always, are these: how bad are the allegations, how well can they be made to stick, and does the story have legs?

Of themselves, the allegations are not yet a resignation matter.

They would only become so if they could be firmed up by directly linking the contact between his advisors and News International to Hunt himself, both because of the substance that would bring and because it would throw his denial of involvement into the realms of cover-up.

That lack of evidence also undermines any attempts to make the current allegations stick. While the episode doesnâ€™t look or sound good, Hunt is not the central character in the drama and so there again, he isnâ€™t in the direct firing line. Minister-hunts are successful when the allegations against the minister in question can be readily summed up in a few words. From what we know at the moment, this canâ€™t.

Finally, does the story have legs? Thatâ€™s hard to say as it depends what else might come out. Leveson will of course continue but as the enquiry shifts focus, so the pressure goes from Hunt. For Hunt to remain in the spotlight, more has to come out about these contacts. This weekendâ€™s papers are crucial in that respect. By Monday, the momentum will have gone from the story if todayâ€™s hearing canâ€™t be followed up with something new.

The value when ministers come under pressure to quit is to back them to go as the story builds then lay off, one way or another. The odds usually overshoot significantly and plenty of odds-on candidates for departure stay in post; prime ministers arenâ€™t keen on losing their colleagues, either to the demands of the opposition or because of a perceived media storm. For one thing, it sets a precedent they can do little to control.

Chances are then that Hunt will survive, at least for now. Whether he lasts beyond the cabinet reshuffle may be an entirely different thing.