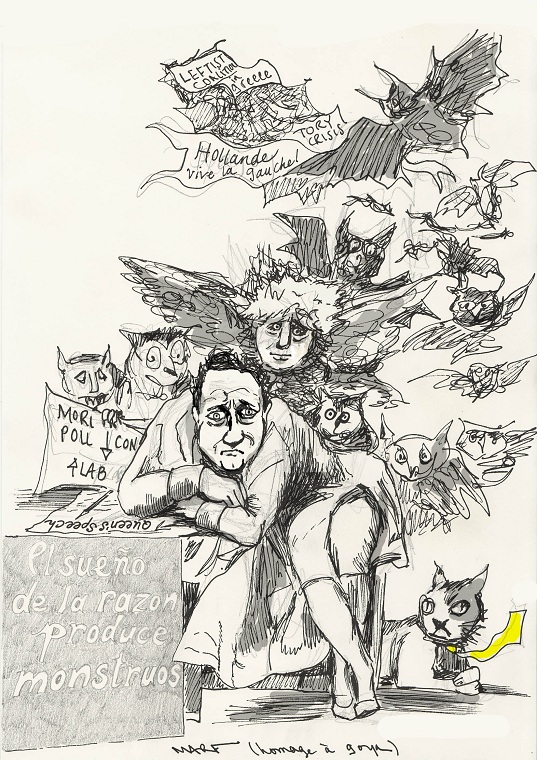 This is how Marf describes her drawing:-

In the cartoon, Cameronâ€™s been struggling to rewrite the Queenâ€™s Speech all night …. With Europe, Greece and France swinging to left and hovering in a sinister way, and Boris and Nick Clegg (the cat wearing the yellow tie) staring, taunting. Honestly it couldnâ€™t be the easiest time for Cameron. I have him dressed as an eighteenth-century gentleman because his Bullingdon dress still evokes so much about his character and outlook â€“ hard to forget that wonderful photo. So I kept the eighteenth-century clothes in the original Goya, because it practically matched the Bullingdon tailored suits the young men are wearing â€“ and their vanity and privilege. Anyway, I tried to sum up the Tory crisis as best I could, but with sympathy …. Itâ€™s a difficult time and we all seem to be clashing and not agreeing … Itâ€™s led to such a feeling of paralysis in this country. The economyâ€™s just part of the story, isnâ€™t it? I left Osborne out because heâ€™s a friend to Cameron, an ally, and this is about demons.