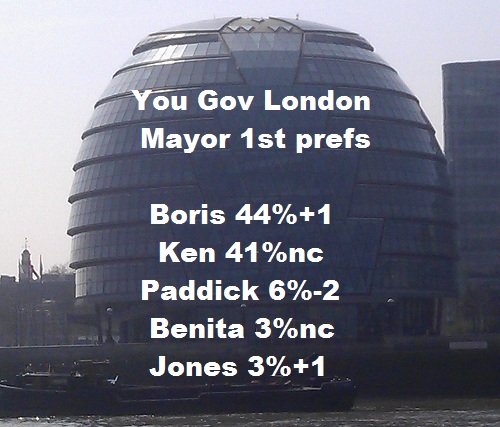 Could he just squeeze in?

The latest YouGov London poll for the Evening Standard is just out and has Boris only 3% ahead on first preferences. That margin is what the US media would call a “statistical dead heat”.

Clearly, if YouGov have got this right, this battle is far closer than the other pollsters who’ve been covering it are making out. Before the weekend ComRes had a Boris 1st preference lead of 9% with Survation recording 11.2%.

Hopefully they’ll both be doing final polls so we can compare.

I’m putting the emphasis in my reporting on the first preference shares which in polling terms are more robust than the 2nd preference allocations.

YouGov, on their calculation, reckon that the lead after 2nd prefs is 4%.

The Standard report of the poll states that of the Lib Dem supporters giving either Boris or Ken their second preference, the former got 70%.