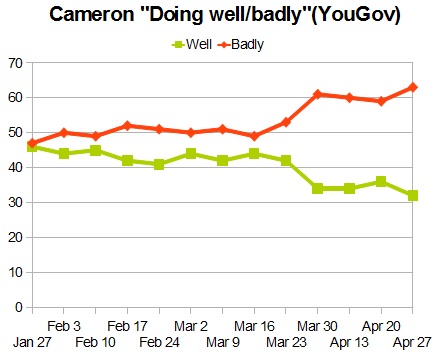 Is this not just a setback but a long-term nightmare?

The weekly YouGov leadership ratings for David Cameron are out and add further to trend we’ve seen since the budget. He’s gone from a neutral 46% Well 47% Badly at the end of January to 32% Well 63% Badly this morning.

Writing in the Sunday Times YouGov’s Peter Kellner observes that “Only Gordon Brown can match such a collapse in popularity, when he scrapped plans to hold a snap election in October 2007. It is not a happy precedent.”

As PB regulars will know that at this stage before an election I place much more importance on the leadership numbers than voting intention. In this poll the party shares were CON 29%/LAB 40%/LD 11%/UKIP 10% – the Tory 29% rating equaling their lowest ever in a YouGov survey.

If these and other polling numbers are reflected in the local elections on Thursday then then blues are going to see huge losses which will only add to the negative narrative.

The big question now is whether the situation is recoverable?

It is always said that Dave is at his best when his back is to the wall. The next week or so could test that theory to the full.

Meanwhile the position of Jeremy Hunt looks even more precarious and Ladbrokes have now tightened his “next Cabinet exit” price to 4/6. Last Sunday you could have got 50/1.

In the next Tory leader betting the money has started to go on House Minister, Grant Shapps. I put a bet on last night at 25/1 – that’s now shifted with Ladbrokes to 16/1.