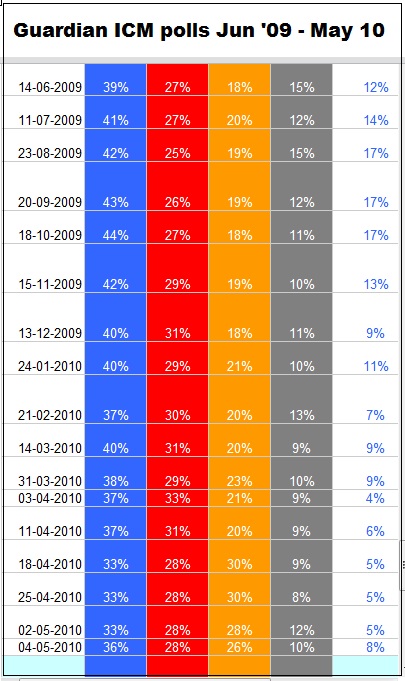 How come that afterwards there was such a big poll decline?

So much has been talked about this week of the political power of the Murdoch empire that I thought I’d that it might be useful to reflect on the period before the last election.

Look at the table of pre-election ICM polls above. By September/October 2009, the time of the Sun’s endorsement, the blues were in the 40s with a solid 17% lead and looked all set to be returned with a comfortable majority.

On election day the Tories secured 37% of the GB vote with Labour 7.3% behind, and crucially 19 seats short of an overall majority.

So in the eight months that followed the Sun move the Tory lead dropped ten points.

As a result of this week we know more about how Rupert Murdoch switched his support away from Gordon Brown in September 2009 when the announcement of the changes was splashed all over the Sun’s front page on the eve of Brown’s big conference speech in Brighton.

The impact of the Sun’s decision was examined closely in Explaining Cameronâ€™s Coalition by Bob Worcester, Roger Mortimore, Paul Baines and Mark Gill, who concluded that almost all change in voting preferences amongst the paper’s readers had happened BEFORE the endorsement.

The paper was just following its readers.

But looking back I wonder whether the Murdoch decision might have had an impact on the overall media narrative causing the Tories to be scrutinised more closely.

For however hard the party tried from January 2010 onwards the media became totally focused on what the Conservatives would do rather than what Labour had done.

Maybe that was inevitable and it could be argued, of course, that without the Sun the decline in the Tory position would have been even greater.