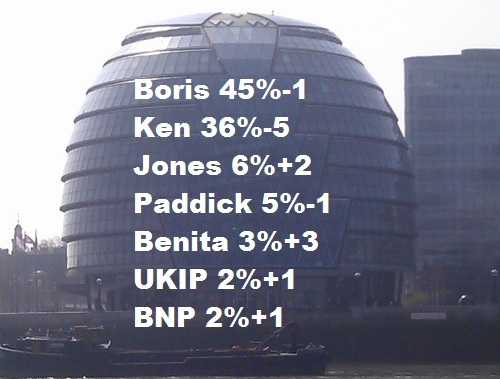 There’s a new London Mayoral poll just out from Comres which is showing a very different picture from that reported on Monday by YouGov.

It was inevitable, as the race gathered pace, that the top two would see some shrinkage as other candidates became better known. What’s striking here is how much Ken has fallen back compared with Boris.

The other key feature is that the Green candidate has now squeezed ahead of Brian Paddick into the 3rd place slot. In terms of actual increases, though from an almost zero figure, is Siobhan Benita – now registering at 3%

The voting intention question was – “In the London Mayoral are you intending to vote for Boris Johnson, Ken Livingstone, Brian Paddick or for another candidate?” There was only prompting for the three main parties.

Ladbrokes have Jones at 12/1 for third place. Looks a value bet based on these figures.