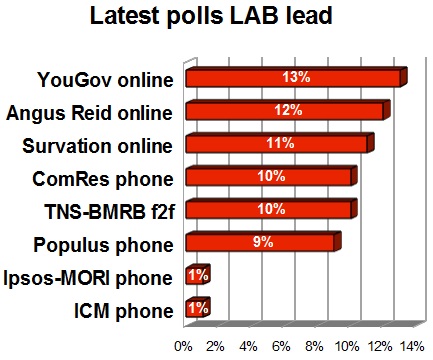 ..is a CON majority becoming an impossible dream?

The chart shows the latest LAB leads in the eight pollsters featured and the top six present a very glum picture for the Tories.

The chart shows that last night’s YouGov 32/45/8 is not out of line – certainly in terms of the LAB lead over CON.

The exceptions, ICM and Ipsos-MORI, with just 1% LAB leads, are the oldest in the list and are from March. Fieldwork for their April surveys will probably start this weekend and my guess is that both will also have poor numbers for the Tories.

Given that even with boundary changes the blue team needs a vote margin of at least 7% to secure an overall majority it is a bold punter or pundit who is now saying that Dave/George can do it.

The Tories are paying a terrible price for the budget and other recent mishaps and it’s going to be a struggle turning this round.

Theresa May’s statement yesterday is only going to add to their woes.

Today the postal ballot forms for the millions who have opted to vote in this way in the May 3rd elections will be arriving in the mail. Most will be filled in and posted over the weekend.

For the Tories so much depends on Boris in London. The rest of the elections look very difficult.