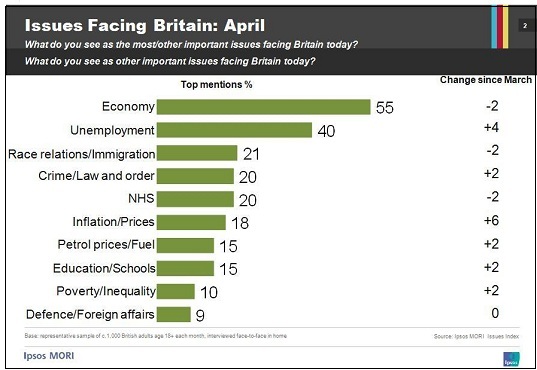 The April Ipsos-MORI issues index for the Economist is just out and shows that concerns about unemployment are the highest since 1998.

Petrol prices/fuel which was just 6% in February continues to rise and is now at 15% – reflecting both the threat of the tanker drivers strike and the increasing price of a litre.

The other main changes are in the table above which features the top ten. We’ll have to wait until the full data is published before seeing the ratings of those areas not included in the chart.

This polling is unique in that interviewees are not prompted in any way.

They are asked, face-to-face, to name what they see as the most important issues facing the country and the index is made up of the proportions mentioning specific areas.

There is no limit on the number of issues each interviewee can mention.

MORI has been doing it this way for 37 years and is regarded as one of the best tests of salience.