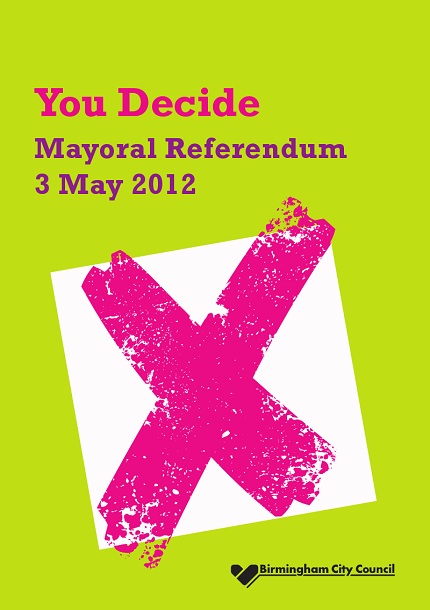 Will more than half the cities vote NO on May 3rd?

In just two and a half weeks voters in ten cities across England have a chance to vote YES or NO to change the structure of local government in their areas by bringing in US-style elected mayors.

This was one of the big ideas in the Conservative manifesto at the general election and the party has been working hard to promote the idea. Cameron, himself, has becoming closely associated with the push and has announced that he will convene a Council of Mayors twice a year.

The referendums are being in Birmingham, Bradford, Bristol, Coventry, Leeds, Manchester, Newcastle-on-Tyne, Nottingham, Sheffield and Wakefield.

The problem is that the big losers when elected mayors are introduced are local councilors who see their powers and roles drastically cut back.

Many are unhappy that the referendums have been foisted on them.

In Bristol ministers have had to intervene over the wording of a council produced leaflet and elsewhere there is growing opposition.

The record of previous mayoral referendums is not promising. Since the power to have elected mayors came in there been nearly 40 such votes and in two out of three places the idea has been rejected.

If more than half the cities vote NO on May 3rd that won’t look good for the government or Dave.

In Doncaster, home of Ed Miliband’s constituency, there’s a referendum on May 3rd to go back to the old system abandoning their elected mayor structure which has been in place for more than a decade.

As well as the referendums next month we have elections for the first elected mayors of Liverpool and Salford.