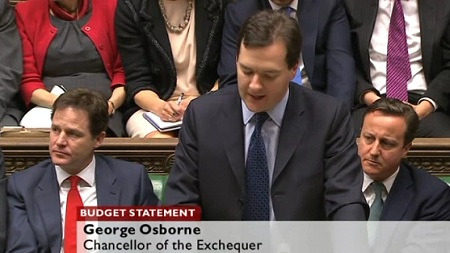 Is the bigger risk keeping him at No 11 or easing him out?

These last four weeks have not been George Osborneâ€™s finest. It began with a Budget which was leaked to such an extent that there was precious little for him to say on the day that was a pleasant surprise. Consequently, the coverage focussed on those parts that were unpleasant surprises, especially where these appeared to hit people on modest incomes at a time when the super-rich were given a tax cut. Managing the PR of those decisions would have been difficult even with the best of handling, and the handling of it was far from that.

Despite all that, his position as Chancellor ought to be safe. In the day job, the big picture is going more-or-less to plan: the deficit is falling (slower than anticipated but then the balance of external shocks and boosts has been negative), unemployment has risen only slowly and the UK has preserved its AAA credit rating, unlike the USA or France. Osborne also remains one of Cameronâ€™s closest political allies and advisors.

In addition, removing a Chancellor can be an extremely dangerous thing for a PM to do. The only ones to have left the Treasury that way in the last 40 years are Howe and Lamont, both of whom subsequently caused a lot of difficulty for the prime ministers they served (after initially having been very close to those self same PMâ€™s).

Even so, the chances are that there will only be one big cabinet reshuffle this parliament: the constraints of coalition make the process far more complicated than it is for a majority government. As a result, the only changes so far have been in response to resignations and even then theyâ€™ve been the slimmest possible. That means that when the reshuffle does take place – probably this Summer or early Autumn, or next Summer – Cameron and Clegg will be close to choosing their teams to go into the 2015 general election battle.

Does – or should – Cameron want Osborne to remain at the Treasury? The case for doing so is that heâ€™s been too accident prone and his media skills are inadequate for whatâ€™s likely to be the most hotly contested topic of debate.

Were he to be reshuffled, the next questions are what alternative job heâ€™s given (assuming heâ€™d accept one – Lamont and Darling both refused when asked to leave No 11), and who heâ€™d be replaced with.

That second question is the easier. There are plenty of alternative Chancellors in the cabinet: Hague, Hammond or Gove could all do the job competently and have been much more sure-footed so far. Of the three, moving Hague would cause least disruption to the rest of the governmentâ€™s programme.

The former question is more tricky. The position of Chancellor really is now secundus inter pares and so going anywhere from there other than No 10 has to be seen as a demotion – something that could be asking for trouble. Still, if moving Hague to the Treasury would be the least disruptive viable option, moving Osborne in the opposite direction would be the least provocative offer Cameron could make him, with the bonus that the Foreign Secretaryâ€™s is a high prestige but relatively low profile position.

Will he do it? Probably not. Thereâ€™d be a big implicit admission of failure both on Osborneâ€™s part and on his own for moving someone in such a senior position so early.

It would also be likely to create bad blood. Politicians hate doing both when other options exist. Should he move Osborne in the mid-term reshuffle? Yes, probably he should.