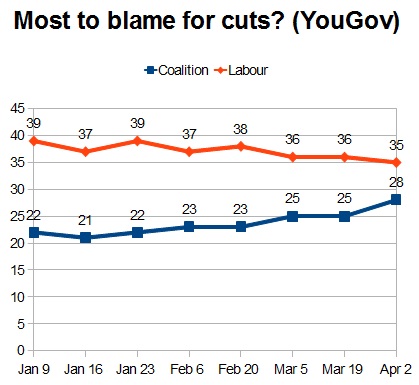 Is this the most worrying trend for the coalition?

PB regulars will know that the one economic tracker that I keep a close eye on is the Who is to blame for the cuts? which YouGov has been asking at least twice a month for nearly two years.

We hear it time and time again – the most central piece of rhetoric that comes from coalition ministers is that drastic action had to be taken because “of the mess left us by the last Labour government.”

The cuts therefore are because of Labour not the government.

From Osborne’s first budget in June 2010 until the end of last year Labour had substantial leads on being blamed. Even at the start of 2012 the gap was 17%,

Now that has started to change and the latest figures, which came out before Easter, had the Labour blame gap in single figures – in fact it’s down to just 7%. That’s a big change in a relatively short period of time.

Being tough on various sections of the population is fine if you can push the blame onto the last lot. It’s going to be a lot harder if that no longer holds.

I think that a lot of the change is down to the budget and the apparent haphazard way in which things were presented when tax rates for the very rich were being cut.