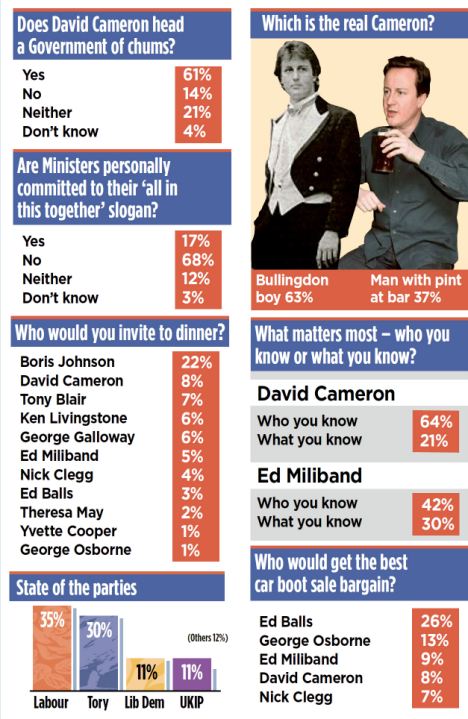 Could it be pressing for a pre-election change

Sometimes the most important factors about a poll are not the findings but how the commissioning newspaper is covering it. That, I’d suggest, is the case today with the Mail on Sunday’s April survey by Survation.

By any standards the coverage, seen in the panel reproduced above, is not very friendly and suggests that the paper would not be too upset if Cameron stood down.

Simon Walters writes ..Perhaps the most damning verdict came when voters were shown two photographs of Mr Cameron â€“ one in his Oxford University Bullingdon Club days and a more recent one showing him dressed in jeans drinking a pint of beer in a pub â€“ and then asked to identify the â€˜real David Cameronâ€™.

The Bullingdon Club emerged as the â€˜real Cameronâ€™ by a margin of 63 per cent to 37 per cent.

Nearly three-quarters of the population view the Conservatives as â€˜out of touchâ€™ and 61 per cent say the Tory leader is â€˜more style than substanceâ€™.

I think it’s significant that the Mail on Sunday has teamed up with the innovative new pollster, Survation, to do things like show pictures of Bullingdon Dave to those who are surveyed. That’s not friendly.

Elsewhere in the media the Sun is not going to perform a cheer-leading role for the blues at the next election and the Telegraph is now in the Dave-sceptic camp.

The question is whether Dave can recover?