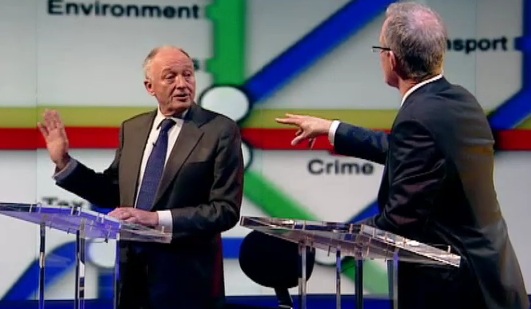 But will Boris be hit by the national Tory collapse?

Exactly four weeks from today six million Londoners will get the chance to vote on who will be their elected mayor for the next four years.

The is the single biggest election in the British political calendar and all three parties will be striving for a good showing. For the Tories this could be their one bright spot on the night.

With Labour moving to double digit national poll ratings the prospects should be very good for party’s veteran campaigner, Ken Livingstone, who first won the mayoralty as an independent twelve years ago. In 2004 he was re-elected, this time under the Labour banner, but then went on to lose to Boris Johnson in 2008.

Last night there was the Newsnight debate when Ken came under fierce pressure from the other contenders over how he’d find the money to fund his public transport fare pledges. Interestingly all the candidates promised to published their tax affairs in full.

I think Ken came out of it poorly. He looks tired and has lost much of the sparkle of previous fights. He has, of course, a lot of baggage.

At the same time Boris and the Lib Dem, Brian Paddick, are much more formidable than 2008. The latter scored a direct hit against Ken on the fares issue – the look on his face in the picture is very telling.

I thought two years ago that Labour made a huge mistake in re-selecting Ken and nothing has happened since for me to change that judgement.

This is the latest betting trend from Betfair.

The experience of previous mayoral contests is that party labels matter much less than in general elections. Voters are choosing the man or woman to be London’s voice. In 2000 and 2004 Ken swept in by attracting cross-over votes from other parties. This time it looks as though Boris will be helped the other way round.

The election is all about turnout levels in different parts of the capital and this should benefit the Tory. In outer London there’ll be higher turnouts than in the inner city.