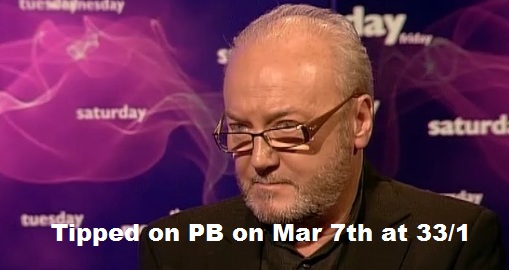 By the Grace of God we have won the most sensational victory in British political history.

This is what I wrote here on March 7th – just three weeks ago:-

“..Could Bradford West break the pattern of LAB holds with a much reduced turnout? Could this be the ideal seat for the return to Westminster of the controversial Celebrity Big Brother star and ex-LAB and ex-RESPECT MP, George Galloway?

Ladbrokes have just announced that they are offering 33/1 against him.

This might be just the sort of seat where Galloway could just be in with a shout. Itâ€™s a long-shot, I know, but itâ€™s the sort of bet that I like.

Heâ€™ll get a mass of publicity and the question of whether he could beat Labour could dominate the media narrative. A lot could depend on how he gets on with the areaâ€™s Asian communities and how they view him.