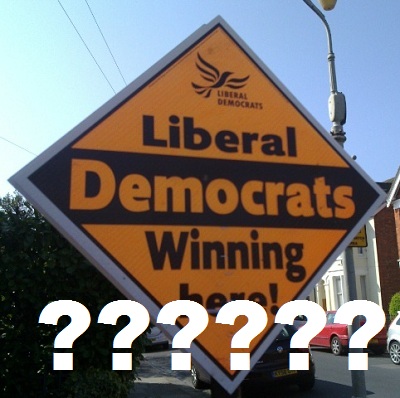 Antifrank on why prospective 2015 losses are being overstated

The Lib Dems, unlike the Conservatives and Labour, will not seriously be trying to win a general election. They will be trying to hold their current seats (or if polling improves, get a few extra). Theyâ€™re going to be fighting seriously in 100 or so seats. On current polling, that number may halve. Seats which get disproportionate effort are going to get disproportionate results.

You donâ€™t have to take my word for it. Lord Ashcroft has done polling on marginals currently held by the Tories. He wrote:

â€œOn the ground, the campaigning battle appears to voters to be intense but, in Labour targets, quite closely fought. Nearly half said they had had literature from Labour or the Conservatives over the last few months, and a fifth said they had had a personally addressed letter. In Lib Dem targets the numbers saying they have heard from the Tories were similar, but the Lib Dems’ incessant leaflet-mongering (which we should take our hats off to, however annoying we may find it) apparently continues: 54% said they had had Lib Dem literature, a quarter said they had a letter, and a fifth said the party had knocked on their door in the last few months.â€

2. Much of the Lib Dems vote in 2010 was wasted in seats where they did not win â€“ this looks to be their softest vote

In 2010, the Lib Dems improved their polling, but lost seats. Why? Because they piled up votes in constituencies that they didnâ€™t win, following the TV debates. I looked at this phenomenon in 2010:

As I noted then, on the list of Labour’s top 150 targets, 125 of those seats are Conservative-held. The Lib Dems polled more than 10% in each and every one of those seats. It increased its vote share in 92 of these seats.

The Lib Dems will not be chasing these voters particularly (see point 1 above). So if the Lib Dems perform in line with current polling, we can expect to see these voters melt away first. This will not harm the Lib Dems in seat count, and probably gives their coalition partners more of a headache than them.

Again, Lord Ashcroftâ€™s commentary on his own polling bears that view out: â€œit is clear that things in marginal Conservative seats where Labour are close challengers, things look slightly more uncomfortable for the Tories than in the country as a whole.â€

3. In most Conservative/Lib Dem marginals, Labour supporters have got nowhere else to go

The great majority of Lib Dem seats have Conservative challengers. To date, the Lib Dems have been very effective at borrowing Labour voters for their cause. As I noted in the 2010 blogpost mentioned above, in the 20 English Lib Dem seats in the top 100 Conservative targets, Labour polled under 10% in all bar three: Norwich South and Bradford East (in both of which Labour finished second) and Berwick-upon-Tweed. By contrast, in only one of these seats on either the Labour or Lib Dem target list is the Tory tally below 10%: Dunfermline and West Fife.

There is plenty of anecdotal evidence of such voters feeling let down by the Lib Dems. But what will they do in a general election? Some may now vote Labour. Some may abstain. But given a choice between the Lib Dems and the Conservatives, I expect that a substantial number of such voters in such seats will continue to vote for the Lib Dems. Such voters are already attuned to the idea of a wasted vote after years of being told â€œitâ€™s a two horse raceâ€.

This will help mitigate the swing against the Lib Dems in such seats.

4. In Labour/Lib Dem marginals, Conservative supporters are going to be much more open to voting for the Lib Dems

Much of the post-election discussion has focussed on how erstwhile Lib Dem voters of a left-leaning persuasion regard their alliance with the Conservatives. There has been practically no discussion of how Conservative supporters in Labour/Lib Dem marginals might act in future.

To date, the Lib Dems have had nothing like the same success in persuading Conservatives to lend them their votes. But with a proven track record of being able to work â€“ more or less â€“ with the Conservatives in government, they may now do rather better. And there are rich pickings to be had in Labour/Lib Dem marginals if they can.

How, for example, will the 6,278 Conservatives in Danny Alexanderâ€™s constituency decide to vote next time? Last time the Conservatives placed fourth â€“ might they be recruited to his cause? Each such recruit would make the 9.3% swing that Labour require and the 11% swing that the SNP would require an even more Herculean task.

5. In three and four way marginals, even where the Lib Dems are no longer popular, the opposition may not coalesce around a single candidate

I have looked so far at swings in isolation. But this is a three and four body problem in some constituencies. Take Argyll & Bute or Edinburgh West. In both of these constituencies, four different parties will fancy their chances. Who are voters to decide is best placed to defeat the Lib Dems? This will make required swings harder to achieve.

In many ways, this is a function of the other five points noted above. But Lib Dem MPs have shown greater incumbency resilience in past elections and there is no reason to assume that it will be different this time around.

The net of all this is that I expect that the swing against the Lib Dems will be roughly 2% less than might otherwise be supposed in both Lib Dem/Conservative marginals and Lib Dem/Labour marginals. (This is not particularly scientific and you are welcome to disagree on the scale, but I do stand by my conclusions that there will be a noticeable effect.) On the figures noted above, this would mean that the Lib Dems would suffer an effective adverse swing of 4% in Lib Dem/Conservative marginals and 5.5% in Lib Dem/Labour marginals. This would leave them with 32 seats. Still ouch, but not quite so bad. If the pro-incumbent effect is 3%, thatâ€™s another 6 seats saved on top of that. And thatâ€™s without assuming any swingback at all.

Of course, this is all on the assumption that the old boundaries apply, and ignores the effect of retirements, any particularly Scottish anti-Lib Dem venom and the impact in university towns. But taken as a whole, I suggest that while the Lib Dems are in for a rough time, the likely extent of their seat losses is much overstated.