Should you be betting on the 3/1 incumbent? 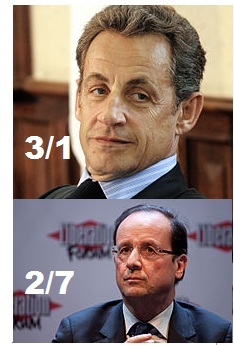 We are just over a month away from the first round of the French presidential election.

Voting takes place on Sunday April 22nd with the final run-off of the top two scheduled for a fortnight later on May 6th – there days after the UK’s big elections.

In the first round there are ten contenders and at one stage there was a question as to whether Sarkozy would even make the final run-off. Now one poll has him ahead of the Socialist Party contender, Francois Hollande.

Other polling has shown the gap narrowing as well – though that is only for the first round.

The critical numbers are on the Hollande – Sarkorzy run-off and here Hollande continues to enjoy double digit leads though the gap has narrowed a touch.

My guess is that as we get closer to the day then this will get tighter though whether Sarkozy has it in him to hang on for a second term is much in doubt.

You can get 3/1 against him doing it. The best Hollande price is 2/7 which both Ladbrokes and William Hill are offering.

For me the betting interest in this election has been killed by the refusal of Betfair to put up a market apparently because of new French laws banning betting exchanges.