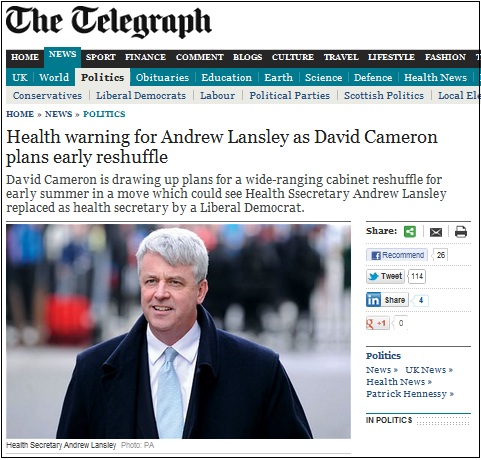 Would this make health less toxic for the Tories?

According to Patrick Hennessy in the Sunday Telegraph the long-awaited ministerial re-shuffle could take place this summer before the Olympics.

One name being increasingly mentioned, and indeed is the favourite for the axe in the next cabinet exit markets, is the beleagured health secretary and Dave’s former close colleague at CCHQ, Andrew Lansley. One possible replacement is Jeremy Hunt, the culture secretary. However it might not be as simple as that as Hennessy reports:-

“The Prime Minister is being urged by senior ministers and advisers to hand over the Department of Health to the Lib Dems in what would be a bold political move.

In return, senior Tories are pressing for the Department for Business Innovation and Skills (BIS) – currently run by Vince Cable – to be led by a Conservative. This would, they argue, prevent the coalition effectively running two differing economic strategies.

Mr Cable, however, would be highly unlikely to relinquish his business brief without a fight. A major government shake-up is fraught with difficulty for the Prime Minister as Nick Clegg, his Lib Dem deputy, would have to agree to any changes affecting ministers from his own party..”

The whole process poses big challenges for the coalition. The Lib Dems might be reluctant to take over health because it could mean them overseeing, and perhaps leaving them open to criticism, on the implementation of the Lansley plan. From the yellow perspective it might be smarter politics if the changes are publicly associated with the blues.

A key part of politics in the run-up to 2015 will be for each coalition partner to claim the good things for itself and to put the blame for the bad things on the other party and, of course, the legacy left by Labour.

If it did go forward like this then my guess is that Norman Lamb, who became a minister in January, would take over health. Lamb is my 25/1 betting choice for next Lib Dem leader. The best you can get now is 6/1.

Other names being speculated about are Ken Clarke, Vince Cable and Baroness Warsi.

Ladbrokes have the best price, 6/4, on Lansley in the cabinet exit betting. If you are betting on these markets check out what happens if several ministers go on the same day. Some have it that their “dead heat” rules apply – others don’t.