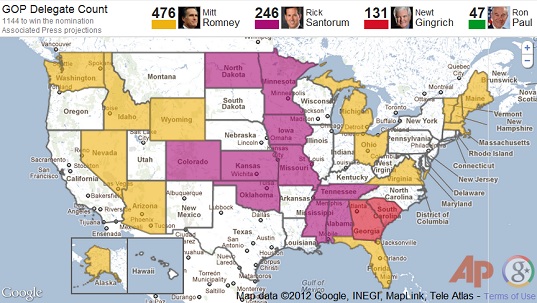 One thing clear: the checkered past of primary pre-election polling in AL/MS didn’t improve any tonight. All polls understated Santorum

Santorum’s tendency to outperform his polling averages is statistically significant.

After failing in Alabama and Mississippi will Newt pull out?

If like me you believed the polling then you won’t have made any money on the Alabama and Mississippi primaries. Yet extraordinarily the unlikely Santorum campaign won in the two southern states overnight to keep his hopes of the nomination alive – just.

He won by a 6% margin in Alabama and a 2% one Mississippi but, alas, in terms of delegates Romney won big in American Samoa and looked set to win in Hawaii.

Last week the Gingrich campaign had indicated that their man would not remain if he failed in the two southern states. He did lose but looks like staying in.

@MittRomney You know what they say: as America Samoa goes, so goes the nation!