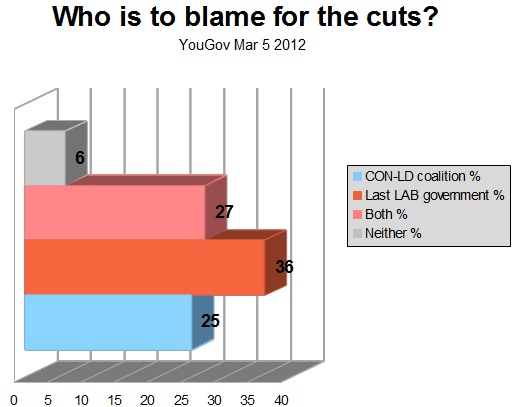 Is the Osborne narrative being less believed?

Starting just a month after the 2010 general election YouGov has been asking in the same standard format the question who do you think is most to blame for the current spending cuts?

I have long regarded this as one of the key political trackers because a central part of the coalition’s strategy has been to justify all the austerity measures by putting the blame on the last Labour government. For the most part it has succeeded.

You hear this almost every time ministers are put under pressure on their economic strategy and the fact that this is now being less believed is significant.

In the first year the number saying Labour was almost always in the 40s and it reached a high of 49%. At the start of 2012 the split was 39% blaming Labour to just 22% saying the coalition.

Now the latest figures from the pollster have the Labour blame number at 36% which is a record low. The gap between that and those saying the coalition is now just eleven points – the narrowest since the election.