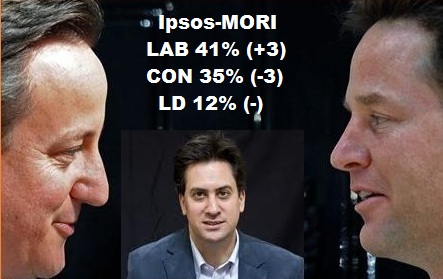 Is this the end of Dave’s “Veto Bounce”

The February political monitor from MORI is out and LAB moves to a six point lead over the Tories with the LDs unchanged. In January the two parties were level with the blues still getting the benefit of the so-called “Veto Bounce”.

All three main party leaders recorded negative satisfaction ratings, with more voters saying they were unhappy with the job they were doing than satisfied.

Cameron’s personal rating was down 10 points since last month on minus 11, with 40% saying they were pleased with the job he was doing as PM, compared with 51% who were not. Nick Clegg scored minus 32 and Miliband minus 25.

For the first time since he became leader in 2010, the monthly Political Monitor found more Labour supporters dissatisfied (48%) than satisfied (44%) with Mr Miliband’s performance.