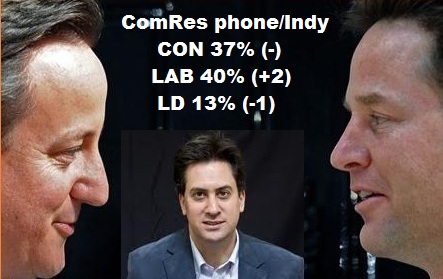 Most people say “Tax the rich” to help poor

A majority of people want George Osborne to raise taxes for the rich in next monthâ€™s Budget in order to take more low paid workers out of tax, according to a ComRes survey for The Independent. 60% of those sampled support the LDs main budget demand while 34% disagree.

I am wary of polling like this – generally speaking people support tax increases that don’t affect them but oppose those that do.

The main VI numbers when the hypothetical “if there was a general election tomorrow” question was put has LAB up 2 to 40 with CON still at 36% and the LDs down one at 13%.

The poll also suggests public support for demands by Tory MPs for any Budget tax cuts to be aimed at business rather than individuals in order to get the economy moving. 58% of people back this approach while 32% disagree.

There is public scepticism about Labourâ€™s call for tax cuts even if that means higher than planned borrowing in the short term.

By a margin of 59% to 31%, people believe the Chancellor should use any spare money to reduce the government deficit rather than spend it on tax cuts.

According to ComRes, voters back Mr Osborneâ€™s plans to end child benefit to families with at least one higher rate taxpayer from next January. It is supported by 61% and opposed by 33%.